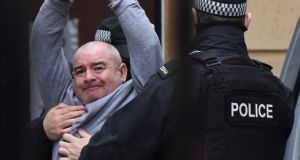 The man charged with the murder of 29-year-old journalist Lyra McKee is alleged to have picked up the bullet casings after she was shot by an unknown gunman, a court has heard.

Paul McIntyre (52), with an address at Kinnego Park in Derry, appeared at the city’s Magistrates’ Court on Thursday.

He is also accused of possession of a firearm with intent to endanger life and membership of a proscribed organisation.

A PSNI detective said she believed she could connect Mr McIntyre to the charges.

Ms McKee was shot dead as she watched a riot in the Creggan area of the city on April 18th last year.

After Ms McKee’s murder, footage was circulated by the police that appeared to show a man firing a gun, and another man bending down to pick up the casings.

Defence solicitor Derwin Harvey told the court there was “scant” evidence to connect his client to the charges. The “totality” of the evidence, he said, rested on a comparison of clothing and a “split second snapshot” of poor quality mobile phone footage.

An application for bail was adjourned until February 27th and Mr McIntyre was remanded in custody.

Ms McKee’s partner Sara Canning, her sister Nichola Corner, and number of other relatives and supporters were in court for the hearing. Some wore t-shirts reading “Speak out for Lyra”.

Outside the court around 40 supporters of Mr McIntyre scuffled with police ahead of his arrival and at one point stood across the road to block it. They held placards reading “Paul McIntyre British scapegoat” and “British injustice is not justice”, as well as posters bearing the logo of the dissident republican political party Saoradh.

They cheered as he raised his handcuffed arms aloft as he was led from an unmarked Land Rover into the court.

In the dock, Mr McIntyre spoke only to confirm his name and address.

The police detective said that more than five hours of footage recorded by an MTV documentary crew who were in the area at the time, mobile phone images from the public, and witness and police statements were among the evidence which had been forwarded to the North’s Public Prosecution Service (PPS), which had then sought the opinion of senior counsel.

“In their opinion the test for prosecution had been met,” the PSNI detective said.

She opposed bail on the grounds of potential inference with witnesses, the risk of further offending, and police felt there was “a very real likelihood” that Mr McIntyre might flee the jurisdiction.

Defence solicitor Mr Harvey said Mr McIntyre had previously been granted bail in connection with charges of riotous behaviour and arson on the night Ms McKee was killed, and he had fully complied with stringent bail conditions.

The allegation against his client was, he said, that “Mr McIntyre is at this riot and a male shoots the gun and that Mr McIntyre, after the gun was shot, picks up the cases”.

He said the “totality” of the evidence against his client was an expert report which stated that clothing Mr McIntyre had been observed wearing earlier in the day was the same as the clothing as that worn by the individual, referred to as “Character Z”, who was later recorded picking up the bullet casings.

The report, he said, described Mr McIntyre as “a suitable candidate for the person who picks up the cases”.

On this basis, he said, “I would ask the court to consider whether there is evidence even to connect Mr McIntyre to the murder charge.”

He said that on more than 50 separate occasions, Mr McIntyre had denied that he was Character Z. When the charges were put to him, Mr Harvey said, he replied: “I didn’t murder anyone. If police speak to witnesses it will show it wasn’t me.”

Mr Harvey said two witnesses described the man who picked up the casings as between 5ft 8in and 5ft 10in, whereas Mr McIntyre was 5ft 2in, a “massive discrepancy in height”.

The mobile phone footage, he said, lasted for “a matter of seconds”, and was of poor quality, not the high definition images filmed by MTV. The MTV crew had left the scene by this stage.

He also said there were insurmountable obstacles regarding joint enterprise in the charge of murder.

Questioned by the District Judge, Mr Barney McElholm, in regard to Mr McIntyre’s clothing, Mr Harvey said the clothing in question was a pair of Adidas trainers, blue O’Neill’s tracksuit bottoms and a black cap.

“I am intrigued by the quote, ‘he is a suitable candidate for the person’ [identified in the footage],” Mr McElholm said. If this was to be proved beyond reasonable doubt, he said, “this needs expanding on.”

Mr McElholm said that the matters raised by Mr Harvey required closer examination, and for that reason he would adjourn the application for bail.

“Whoever continues to put up graffiti in Creggan threatening witnesses and journalists and those vile posters [of Peadar Heffron] erected yesterday in parts of the city,” Judge McElholm said, “were doing Mr McIntyre no good whatsoever.”

“I am very conscious,” he said, “that a young a woman with her entire life ahead of her, a very promising life by all accounts, was murdered needlessly and pointlessly, like all other murders carried out in this country.

While it was “very important the murderers of Lyra McKee be brought to justice,” he said, we need to get the right people and every accused person before the court is allowed a fair trial.”

The application was adjourned for two weeks to address points raised in regard to biometric analysis, any additional witnesses, and whether there was an increased risk that Mr McIntyre might flee the jurisdiction.