Met Éireann says conditions will deteriorate on Friday ahead of storm 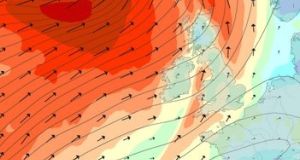 A wind map from midday on Friday showing the anticipated movement of Storm Dennis off the west coast of Ireland. image: Magicseaweed

Met Éireann has warned of potential flooding over the weekend as Storm Dennis brings heavy rain and high winds across the country.

Parts of the coastal fringes of Connacht and Munster can expect up to 70mm of rain between Friday and Monday morning. The rest of the country will also experience heavy rain with falls of between 30mm and 40mm, some if it falling as sleet or snow on Saturday and Sunday night.

Forecaster Deirdre Lowe said “very heavy rain” will come after a spell of wet weather where river levels are high and she warned there could be flooding in the Shannon callows and in rivers in the south.

The last seven days have seen extremely wet weather as a result of Storm Ciara with some places getting four times the average amount of rain for the period.

The forecast centre warned that ships in the Atlantic could be in danger as waves reach as high as 30 metres.

Storm Dennis is set to arrive on Saturday morning and will bring heavy rain and strong southerly winds. Temperatures will be around normal, but will drop to near freezing on Saturday night. Met Éireann will issue weather warnings wind and rain later on Thursday.

Orange level wind warnings are expected to be issued for the coastal counties of Connacht and for Donegal over the weekend.

“Coastal fringes will bear the brunt of it,” said Ms Lowe. “It will be very windy on Sunday and some of the showers will turn wintery on Sunday and Monday.

“It doesn’t look as cold as Ciara, but there will be some falls of sleet and snow.”

Storm Dennis will bring a wet and windy day on Saturday with strong southerly winds and widespread heavy rain.

Temperatures during the day will reach 7 to 11 degrees and will fall overnight to between 1 and 3 degrees as the rain breaks up somewhat and skies clear. There will be widespread showers through the night.

The effects of Storm Dennis will continue to generate strong to near gale force winds on Sunday.

It will turn cooler with daytime temperatures of 6 to 9 degrees with showers turning wintry on higher ground in the west.

Scattered showers will continue overnight on Sunday with some turning to sleet or possibly snow in the north and northwest. Temperatures will fall to 2 degrees.

Monday will still see windy weather which will bring showers to western coastal counties. It will be mainly dry with sunny spells further east. There will be highs of 7 to 9 degrees.

Showery and windy conditions will continue into next week.