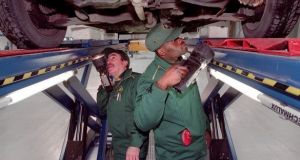 Drivers are advised to book and attend their NCT as normal, and that checks, apart from the underbody inspection, would be conducted.

Defects have been found in 85 National Car Testing Service (NCTS) vehicle lifts across more than 30 testing centres, according to the results of a full condition survey commissioned by the NCT operator Applus.

At the end of last month a key part of the national vehicle tests, the underbody check, was suspended due to safety fears over cracks discovered in the vehicle suspension lifts.

Applus, the company contracted to run the national car tests, has said it will be the end of April before full tests will be available in all 47 centres.

The issue arose when the NCTS was informed by lift manufacturer Maha of cracking defects uncovered in similar lifts in Northern Ireland testing centres.

The defect is a hairline fracture along the scissor arm of the lift equipment, which poses safety risks as staff would be under the vehicles during the underbody inspection.

The results of a condition survey of all lifts, completed on Friday, show the defects were found in 85 NCT vehicle lifts, which have been taken out of operation until they are repaired or replaced.

Last week eight vehicle lifts were cleared to continue operating, and 13 lifts were repaired by the manufacturer this week.

Drivers are advised to book and attend their NCT as normal, and that checks, apart from the underbody inspection, would be conducted. Drivers will have to return to have the underbody checked when the lifts are operational.

There is no charge for the second test to inspect the vehicle’s underbody as long as the vehicle passed all other elements of the NCT during the initial test.

In a statement on Friday, NCTS general manager Grant Henderson said it was the operator’s aim “to ensure that we have lift availability in most centres as soon as possible”.

The NCTS will begin a programme to then replace all the repaired lifts with new machinery from June onwards, he said.

To cope with expected increased demand, the service is to hire additional inspectors and extend testing centre opening hours as lifts come back into operation, to clear the backlog of tests.

“Due to the current situation, we are asking customers not to book too far in advance to alleviate the demand on the test centre network at the moment,” a spokeswoman for the NCTS said.