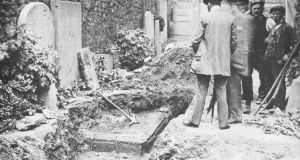 Men survery the scene of the dig at the Emmet family plot in St Peter’s Chruch in Dublin in 1903. Photograph: Representative Church Body Library/Colin O’Riordan

The disappearance of the body of Robert Emmet is one of the great mysteries of Irish history.

Emmet was tried and then hanged for instigating the ill-fated 1803 rebellion. He became an icon of Irish martyrdom for his speech from the dock in which he concluded: “Let them and me rest in obscurity and peace, and my name remain uninscribed, until other times and other men can do justice to my character. When my country takes her place among the nations of the earth, then, and not till then, let my epitaph be written.”

After he was publicly hanged outside St Catherine’s Church in Thomas Street on September 20th, 1803, his head was displayed to the crowd by the hangman Thomas Galvin. The remains of Emmet’s body was taken to Bully’s Acre in the grounds of what is now the Royal Hospital Kilmainham and buried there.

When some of his friends went to reintern his remains in St Michan’s Church in Church Street, a church associated with the United Irishmen, they found there was no body there, and so began a search which endures to this day.

The desire to locate the body of Emmet and give him a final resting place became particularly acute during the centenary of his death in 1903.

The secret excavation yielded nothing except a set of ghostly photographs that were put away in a drawer for more than a century and forgotten about.

“I discovered a small square cardboard box containing lantern slides of what appeared to be a Victorian archaeological excavation,” he recounted.

“As this material was not part of the Irish Press photographic collection, it was not considered of importance to catalogue, let alone keep.”

However, he had the foresight to keep the photographs sensing that they would be of value.

Fast forward to February 2019 and a chance meeting with the Church of Ireland diocesan communications officer for Dublin and Glendalough Lynn Glanville.

One photograph showed a gable wall and the side of a church. What church? Eventually it was determined that it was indeed St Peter’s Church in Aungier Street.

A look at the parish minute books revealed that Dr Emmet did indeed request an exhumation which was granted in March 1903. However, after five days searching nothing was found.

Dr Emmet was unsuccessful in locating Robert Emmet’s remains at St Peter’s, noting that “after a search of five days nothing was found in connection with the Emmet family”.

The photographs have been restored and are a fascinating insight into the post-Victorian world showing the divisions of class between the labourers excavating the site and the gentlemen looking on in their top hats and long coats.

The photographs have now been restored by the Representative Church Body (RCB) library of the Church of Ireland and they have the images available to the public in an online exhibition which can be found at ireland.anglican.org.

As for the search for Emmet’s body, it goes on. As many of his supporters have said over the last two centuries: “Do not look for him. His grave is Ireland”.