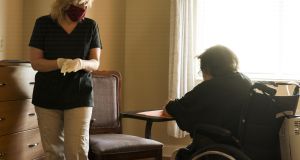 Some 56 HSE home-support staff have been redeployed, 51 of those to publicly run facilities and five to private nursing homes. File photograph: Getty

Fewer than 150 home carers have been redeployed to nursing homes and other residential facilities to help tackle coronavirus outbreaks, new figures show.

It was anticipated between 750 and 1,000 home carers would be redeployed to help nursing homes deal with staffing shortages, following an agreement in early April between the Health Service Executive and Home and Community Care Ireland (HCCI).

However, figures show that six weeks on just a fraction of home carers have been redeployed to crisis-hit nursing homes.

Some 56 HSE home-support staff have been redeployed, 51 of those to publicly run facilities and five to private nursing homes.

A further 90 workers from private home-care providers have been redeployed under the agreement, with 48 sent to HSE-run homes and 42 to private nursing homes.

The nursing-home sector has been severely hit by Covid-19, with 4,519 confirmed cases and 798 deaths, more than half of all coronavirus deaths.

HCCI chief executive Joseph Musgravesaid the deal to redeploy workers was agreed with the expectation nursing homes would need “hundreds of staff on the ground” within weeks.

Policy changes to conduct widespread testing of nursing home residents and workers meant the staffing crisis “seems to have lessened somewhat”, he said.

HCCI, which represents private operators providing home-care services, had anecdotal evidence of offers to redeploy staff not being taken up by the HSE at local level, said Mr Musgrave.

There is a need to ensure there are no “gaps in some parts of the country” where nursing-home requests for extra staff are not being met due to a disconnect with the HSE, he said.

Mr Musgrave met Minister for Health Simon Harris and senior HSE officials on April 29th to discuss the threat of the virus spreading among people relying on home care.

To date only 58 of the 20,000 people receiving home care support from HCCI members have tested positive for coronavirus.

However, the fear is that without adequate testing and personal protective equipment (PPE) for staff, the virus could be spread by carers from one home to the next during their rounds.

The sector has a “stable” supply of face masks for the next two weeks, but Mr Musgrave said he “would worry after that”.

During the meeting with Mr Harris, the roll-out of testing for those cared for in the community and supply of PPE for staff were two key issues discussed.

There has been no progress on either issue in the two weeks since the meeting, which was “very frustrating”, said Mr Musgrave.

“I don’t want our members competing with the HSE for PPE” or left purchasing substandard protective gear, he added.

The experience of nursing homes had shown elderly and vulnerable people carrying the virus could present as asymptomatic, meaning there is a need for widespread testing of home-care clients, he said.

Similar to nursing homes, there was the potential for the virus to spread “like wildfire” through the community home-care network, he added. “I don’t get why they aren’t all over this.”

In a statement, a HSE spokeswoman said where home care workers require a test, “they are prioritised for Covid-19 testing and there is no delay in scheduling a test appointment.” Where a person receiving home care requires a test this is also the case, a spokeswoman said.

The number of coronavirus-related deaths in nursing home and residential care facilities, as a percentage of overall deaths, continues to trend upwards.

The State’s chief medical officer Dr Tony Holohan said on Tuesday the average percentage of overall Covid-19 deaths relating to residential care facilities recorded over the past week was 68.1 per cent and 64.2 per cent relating to nursing homes residents.

This is higher than the overall number of deaths since the first coronavirus-related death in March. Dr Holohan said that residential care facilities account for 937 or 63 per cent of all 1,488 deaths while nursing home deaths total 815 or 54.8 per cent of the total.

The number of confirmed Covid-19 cases in nursing homes rose by 105 to 4,624 on Tuesday, accounting for one in every five known cases of the disease in the State. Overall, the number of cases in residential care facilities reached 5,923.