Coronavirus: Face masks might be used for shops, transport - Holohan

The World Health Organization (WHO) says "extreme vigilance" is needed as countries begin to exit from coronavirus lockdowns to avoid a second wave of infections. Germany has reported an increase in new infections after early steps to ease restrictions, while South Korea has seen a new outbreak in nightclubs. Video: Reuters 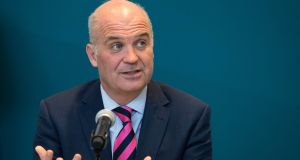 The chief medical officer has indicated there may be a role for wearing face masks in retail settings, on public transport and elsewhere that social distancing is challenging.

Speaking at the daily briefing on Covid-19 on Tuesday evening, Dr Tony Holohan said more information on guidelines for use of facemasks will be forthcoming on Thursday, after the scheduled meeting of the National Public Health Advisory Team (NPHET).

“There will be a role for face coverings that are not of a medical grade,” he said, “perhaps in retail environments, public transport and so on.”

He was speaking after the Department of Health confirmed a further 24 deaths, bringing the total number of people who have died with Covid-19 to 1,488. A further 107 new cases were confirmed in the State, bringing that total to 23,242. The number of new cases was the lowest for several weeks, and represented a growth rate of just 0.5 per cent.

Dr Holohan said he was “hopeful” that measures can be further relaxed next Monday, but he would not make a final decision on this until later in the week. “We want to see further progress, and we would still point to the fact we have over 70 people in intensive care units and almost 600 people in hospitals with this disease.”

The NPHET representatives defended the progress made on testing and tracing, where average times to process cases and conduct contact tracing still lag significantly behind the recommendations of experts who say the entire process should be completed within about three days.

“We know we need to get better but it’s a huge improvement on where we were,” said Dr Cillian De Gascun, head of the National Virus Reference Laboratory (NVRL) and a member of NPHET.

Dr De Gascun also indicated the criteria for testing could be loosened again, as recent changes haven’t “ swamped the system as it has in the past”.

“We’ve still plenty of spare capacity, probably gives us a little bit of room in the coming weeks to broaden out the case definition some more,” he said.

Colm Henry, chief clinical officer at the HSE, warned that the health system will profoundly change due to the impact of Covid-19 and these changes would have to be made to work alongside the virus in the future. “It will never be business as usual again,” he said. Asked about the likely resumption of screening programmes such as BreastCheck and CervicalCheck, he cautioned it would be some time before they resumed, and that the impact of the crisis would result in changes to the systems.

Meanwhile the latest HSE figures show the number of confirmed and suspected hospitalisations over coronavirus has increased.

As of 8pm on Monday evening there were 826 patients hospitalised over coronavirus, 529 patients were hospitalised with confirmed cases while 297 were suspected cases.

Fianna Fáil leader Micheál Martin has called for the turnaround time for Covid-19 testing and contact tracing to be “considerably shortened” as they are key elements in the reopening of society.

When asked about the statistics for Covid-19 in other countries Mr Martin said he was not one for pillorying others, but that lessons could be learned from other countries.

“We are not where we need to be yet for the reopening of the economy,” he told Newstalk’s Pat Kenny Show on Tuesday morning.

Testing people for Covid-19 and tracing all their contacts is taking an average of about nine days, according to the Health Service Executive (HSE), a multiple of the time most experts say the process needs to be to stop the virus spreading.

The median time from referring a person for a test to sending the result for contact tracing is five days, according to David Walsh, HSE national director of community operations.

The average time taken to then trace all the contacts of a confirmed case is four days, Mr Walsh told a National Public Health Emergency Team (NPHET) briefing, although “straightforward” cases are dealt with more quickly.

Mr Walsh said this was “an improving figure” and would shorten with the automation of the process in relation to negative results.

Prof Mary Codd, an epidemiologist at University College Dublin (UCD) and head of the contact tracing centre on the campus, said it was vital test results for Covid-19 were turned around within 48 hours by the time people return to work next week.

The entire testing process must come to within 48 hours, or certainly no longer than 72, in order to cut out the spread of the virus in the population, she said. “Otherwise actually we are likely to be looking at these sporadic outbreaks that may not be able to be contained.”

The process of sampling, testing, communication of results to a positive case, contact tracing and quarantine of contacts needs to be done within 72 hours, immunologist Dr Tomas Ryan of Trinity College Dublin has also said.

Meanwhile, World Health Organisation (WHO) spokeswoman Dr Margaret Harris has said that all countries need to ramp up their Covid-19 testing and contact tracing as they are essential parts of the puzzle of coping with the virus.

Dr Harris told RTÉ’s Today programme that masks were not the chief protection against the virus and the WHO had not said that they should be compulsory.

Asked about research conducted for the Department of Health which indicated that 43 per cent of the Irish population believed the worst of the Covid-19 pandemic is over, she said the virus can continue to do “very, very bad things to us” if the public does not heed the warnings the virus has sent”.

While staying at home was important, everyone would now have to learn to live in a new way that stops the virus from causing harm. Good overall hygiene, proper hand washing and social distancing continued to be important methods of protection, she said.