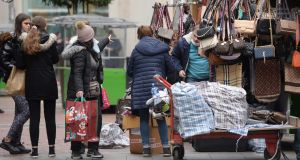 Street traders on Dublin’s Henry Street and O’Connell Street have been given the go-ahead to set up their stalls for the run-up to Christmas.

A compromise deal between traders, Lord Mayor of Dublin Hazel Chu and Dublin City Council has been struck after three weeks of talks.

The deal will allow a limited number of traders to work and comes after the local authority banned them from working in a letter on November 11th due to Covid-19 concerns and rolling restrictions.

A council spokesperson said that there are plans for 25 stalls, with 15 planned for Henry Street and 10 on O’Connell Street. Normally there are 40 stalls located on Henry Street.

“The drawing of lots for the allocation of stalls was made today (Wednesday), which was overseen by the Lord Mayor and the Henry Street Traders Committee,” the council said.

“Following a meeting which took place last Friday, a letter was sent out to each stall holder with all the relevant information from the Lord Mayor, DCC and the committee combined outlining a proposal for trading.”

It is expected that the traders will be back in operation by the end of this week and will work up to Christmas Eve.

The Henry Street Traders Committee welcomed the move and thanked councillors for their help.