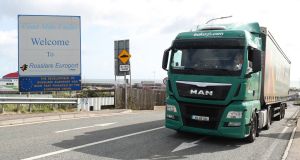 Brittany Ferries have been criticised for stopping providing hot meals to drivers on the Rosslare-Bilbao route. Photograph: Niall Carson/PA

Independent TD Verona Murphy has called on Brittany Ferries to reverse a decision to stop serving hot meals to hauliers bringing vital supplies to Ireland during the Covid-19 pandemic.

Ms Murphy, elected last February as a TD for Wexford and a former President of the Irish Road Haulage Association, was highly critical of Brittany Ferries for stopping providing hot meals to drivers on the Rosslare-Bilbao route.

“Rosslare to Bilbao is a 30 hour voyage and all the drivers are being offered is a cheese sandwich - these men are playing an essential role in keeping the supply chains going and they are expected to live on a cheese sandwich.

“It’s difficult enough for drivers to get a hot meal on the road and now for Brittany Ferries to stop serving hot meals on-board ship, it’s just not good enough, particularly on a journey that takes 30 hours.”

Ms Murphy said truck drivers should be treated just like doctors and nurses and others in the front line in what is a national emergency. “People doing vital work going to Europe for supplies need to be treated properly,” she said.

“Most of what is going out of the country and being brought in at the moment is absolutely essential - it’s food, it’s pharmaceuticals, it can be test kits, it can be anything - it can even be PPE gear that’s collected in Heathrow.

The Irish Times contacted Brittany Ferries about the issue of the company no longer providing hot meals to hauliers on the Rosslare to Bilbao route and a company’s spokeswoman said it was due to concerns over Covid-19.

“To safeguard the health and well-being of everyone onboard, we have to minimise any interaction between drivers and crew members. Unfortunately this means that onboard restaurants must remain closed and food provision is limited,” said the Brittany Ferries spokeswoman.

“All hauliers are made aware of this in advance of travelling and we encourage drivers to bring their own food and drink onboard. We are doing everything possible to maintain a service to our freight customers during this unprecedented crisis.”

However, Ms Murphy said she was familiar with the Brittany Ferries ship saililng on the Rosslare-Bilbao route, having visited the catering and dining areas previously and it was large enough to allow proper social distancing.

“I’ve been on that ship in Rosslare and you can’t say that there is anybody in danger because of the amount of drivers they have now - certainly the social distancing is not a problem - they have enough space to cater for people.”

Ms Murphy said she was quite sure that crew on board the Brittany Ferries ship were not being asked to survive on cheese sandwiches and that hot meals were being prepared for them and could easily be provided for hauliers.

And she pointed out that Stena Line were continuing to provide hot meals for drivers after introducing social distancing procedures, where drivers collected their meals from a designated spot where they were left by catering staff.

They then brought their meals to a designated place in the eating area where everyone was kept two metres apart and it should be possible for Brittany Ferries to introduce a similar regime on their ships, she said.

She urged Brittany Ferries to follow the example of Irish Ferries which similarly stopped serving hot meals to hauliers but then reversed its decision after the Irish Road Haulage Association wrote to them to express concern.

IRHA President, Eugene Drennan said that it was “a national outrage” that Irish Ferries had chosen to a “callous and mean-spirited decision to treat drivers in this manner” by ceasing to serve them hot meals.

In his letter to Irish Ferries, Mr Drennan said that the IRHA had been inundated with calls from its members expressing dismay at the decision by Irish Ferries to cease serving hot meals to Heavy Good Vehicle drivers during sailings.

It’s understood that Irish Ferries promptly reversed its decision and began serving hot meals on all its sailings to hauliers with the cost of the meals incorporated into the booking fee for themselves and their lorry.