Airline expects 60% of its flights to be back by September 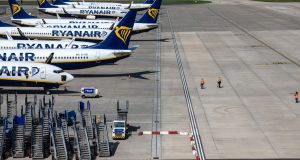 Michael O’Leary expects Ryanair flights to reach about 40 per cent of the usual schedule in the month they resume, most likely late June or early July, increasing to 60 per cent by September. Photograph: Getty

Ryanair told Europe’s top competition official that it may go to court to stop France and other countries from “selectively gifting billions of euros to their inefficient flag carriers”.

Michael O’Leary, Ryanair’s chief executive, said in a letter to competition commissioner Margrethe Vestager that the European Union would be “forced into an embarrassing U-turn” on state aid if Ryanair won a legal challenge. The national programmes should be modified so that Ryanair could get a share of the bailout packages by making sure loan guarantees and other perks are available to “all EU airlines in proportion to their share of traffic in a particular country,” Mr O’Leary said in the April 9th letter seen by Bloomberg.

Ryanair’s intervention threatens to slow government efforts to shower billions of euros of aid on airlines across the region, after the coronavirus outbreak halted travel.

France and the Netherlands are readying a bailout package for Air France-KLM and Deutsche Lufthansa, the region’s biggest carrier, has discussed a rescue from Germany and other countries. Italy wants to take over bankrupt Alitalia.

“These are the crack cocaine junkies of the state-aid world because their first instinct is to always go to the government for state aid,” Mr O’Leary said in an interview. “We believe that any state aid in this crisis should be transparent and provided to everybody.”

Separately, Mr O’Leary said he won’t take delivery of Boeing’s 737 Max jetliner until summer 2021 as air travel claws its way back from the coronavirus outbreak. Ryanair is one of the main customers for the Max with 210 orders. The jet had been grounded for a year after two fatal crashes by the time the pandemic hit European flights, and Mr O’Leary said on Friday that Ryanair doesn’t now want the planes until markets return to normal.

The carrier is banking on the collapse of weaker rivals to drive growth, Mr O’Leary said. Its flights should reach about 40 per cent of the usual schedule in the month they resume, most likely late June or early July, increasing to 60 per cent by September, the last month of the summer season, he predicted. The winter timetable may operate at more-usual levels as price wars prompt people to make up for missed summer holidays. – Bloomberg