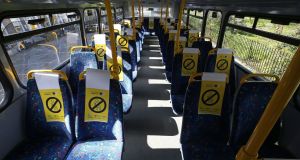 Dublin Bus has reduced capacity on its vehicles as part of efforts to suppress coronavirus. Photograph: Nick Bradshaw

Dublin Bus has notified the Government of an increase in passenger numbers this week as senior officials described the recent increase in public activity as a “cause for concern”.

At the Government’s morning Covid-19 briefing, assistant secretary general at the Department of Taoiseach Liz Canavan said the Government is aware of concerns that “people are becoming complacent” about coronavirus restrictions.

“Dublin Bus notified us yesterday evening of an increase in passenger numbers day on day this week and all days are above levels seen in previous weeks.

“They are engaging with the National Transport Authority to try and pinpoint more specific data on this for us. An Garda Siochana will also keep us updated on their view.”

Gardaí will again operate a large network of checkpoints across the country this weekend and urge people to stay home and stay safe.

“We will continue to monitor a range of indicators which allow us to understand the level of compliance with current restrictions. While movement alone does not mean that people are breaking social distancing rules when they are out, it is certainly a cause for concern,” Ms Canavan said.

“The more we move around, the more risk we create. Increased footfall means we are sharing spaces, using the same facilities, coming into contact with more shared surfaces, even if we are not there at the same time.”

On Thursday the Government said that there had been no notable increase in traffic on national roads on the basis of figures provided by Transport Infrastructure Ireland for earlier in the week.

Ms Canavan said work is underway to provide real time information on such movement. Later on Thursday evening the chief medical officer Tony Holohan said that there is in fact evidence of increased traffic and more people on the move.

Ms Canavan defended the Government’s decision to release the TII figures and said that they want to provide the public with as much information as possible when such information is received.

She said at assumptions cannot be made that if the public relaxes the virus will behave any differently than it has up to now.

“There is a meeting of trade unions and employers today with the Taoiseach to outline our own approach to the gradual reopening on a basis that is safe for both employers and employees and it is part of a number of ongoing discussions.”

“I need people at home to know that these next 12 days matter, because the more we can suppress the virus, the more headroom, for want of a better phrase, that we actually give ourselves in terms of options.”

On Thursday, the deaths were announced of another 28 people who had been diagnosed with Covid-19, alongside a significant spike in diagnosed cases of 936. This brought the laboratory-confirmed death toll to 794 and the number of confirmed cases to 17,607.

Ruairí Brugha, professor of epidemiology and public health medicine at the Royal College of Surgeons in Ireland (RCSI) warned on Friday morning that “we’re looking at the long haul” and that “we’re not going back to normal” with regard to hygiene and physical distancing.

Speaking on Morning Ireland he also warned that if restrictions are eased “in a phased way” it is up to the public to take responsibility for their behaviour.

“It is not enough to have four fifths of us taking responsibility. It takes only a small number behaving in a celebratory manner … I takes only two to three per cent behaving in an irresponsible way and the virus will jump up again.

The head of medical affairs with a company that manufactures vaccines also warned that it is difficult to put a time frame on the development of a vaccine for Covid-19.

Jon Barbour, of GSK Ireland said developing a vaccine is a very challenging process and in some cases can take up to 10 years.

The great challenge now is to come up with an effective vaccine in a shorter time. It was unprecedented that researchers, academics and the pharmaceutical industry around the world had come together to find a vaccine, he said.

This level of global cooperation was unprecedented. “It’s a complex process with many working together”, he said.

Experts agreed that a time frame should not be put on such efforts, but “typically it could take 12-18 months”.

Covid-19: Nine in 10 teachers fear pandemic has damaged mental health of pupils 07:27
Prisons see huge increase in ‘hooch’ seizures during lockdown 02:55
Airport immigration detention facility still not operational 02:53
Ireland among countries urged to consider reinstating restrictions 02:46
‘We feel we are in limbo’: Wedding plans in chaos due to Covid-19 02:05

1 Ireland among countries urged to consider reinstating restrictions
2 Sinn Féin apologises as member resigns over social media abuse
3 ‘We feel we are in limbo’: Wedding plans in chaos due to Covid-19
4 Global Covid-19 cases pass 20m as WHO points to ‘green shoots of hope’
5 O’Doherty ‘trying to evade’ service of defamation proceedings, court hears
Real news has value SUBSCRIBE