‘Not practical’ for everyone to walk to work, says Independent TD 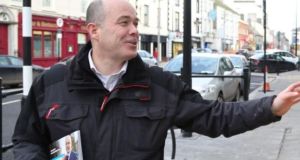 The Green Party’s demand for a slashing of Ireland’s carbon emissions is unachievable and talk about everyone walking to work is not practical, a prominent Independent TD has said.

Denis Naughten, who is the convenor of the Regional Group of non-party deputies, was speaking after the Greens published a list of 17 demands the party wants addressed before considering a coalition government with Fine Gael and Fianna Fáil.

Mr Naughten said there is a need to stop “shadow boxing” and to move on to proper negotiations for a programme for government.

Any coalition government between Fianna Fáil, Fine Gael and one of the smaller parties may also require the support of a number of independents

Mr Naughten, who is a TD for the Roscommon-Galway constituency, warned the Green proposals were not possible and that it was not practical to have everyone to walk to work to help reach the Green Party targets.

“We need to look at practical measures,” Mr Naughten said. According to the TD, the best way for creation of a stable government is to have the two main parties along with a third smaller party and then the eight independent TDs.

“That’s our preference. The reality is we need a government urgently to make decisions that need to be made in the next couple of weeks.

“It is imperative that we have a government in place to take best decisions in the interest of the country,” he said.

Mr Naughten said the document from Fianna Fáil and Fine Gael was “quite helpful” and that “within a fortnight” there could be a programme for government. However, the difficulty was who would be sitting around the table.

“I welcome the fact that they [the Green Party] have published that particular document, and hopefully it can help to move things forward. But personally, and from my own experience as Minister for Climate Action, the 7 per cent annual reduction in carbon is unachievable,” he told Today with Seán O’Rourke on RTÉ Radio One.

“To talk about and give listeners an idea of the type of figures we’re talking about here – if we banned every single private car in the country and everyone walked to work every single day, we’d reach that target for 14 months of the next five years.

“If we slaughtered every single animal in this country we would still not achieve the five-year target that the Greens are setting out here – that’s the type of scale that they’re talking about and it is not possible to do that in a very short period of time, and we need to look practically at the type of measures and changes that need to take place, and absolutely there has to be a very different economy now, there’s no doubt about that, and there’s huge opportunities for people to work from home and reduce significantly their transport emissions, but it’s not practical to talk about everyone walking to work.”

Meanwhile, Green Party leader Eamon Ryan has said addressing the climate and biodiversity crisis “is a red line” for his party to enter formal coalition negotiations with Fianna Fáil and Fine Gael.

Speaking on RTÉ’s Morning Ireland, he said it would require setting “a scale and level of ambition” to cut back on pollution levels and doing that in a way that delivers the “just transition”.

“So in terms of that broad biggest project that we think needs to be taken on, is absolutely a broad red line,” he said.

On Thursday the Green Party set out 17 commitments it is seeking from the two parties before taking part in talks. Senior figures in Fine Gael and Fianna Fáil believe they can progress to negotiations on a coalition government with the Green Party on the basis of those demainds.

But Mr Ryan said clarity is required to know the next government is going to change Ireland towards a “greener” country and that scientific advice is heeded.

Separate to tackling climate change, he said, the two other main aims would be the development of public housing and conversion to a public universal health system.

The Fine Gael and Fianna Fáil document was “aspirational”, but that was not a bad thing as it sets out a broad outline, he said.

Mr Ryan said for any parties going into government, it takes a couple of weeks to go through the full range of issues.

If Fianna Fáil and Fine Gael are going to shift the nature of the economy towards public housing and public health they would need to be specific about how they are going to do that, Mr Ryan said. The Green Party leader said rather than invest heavily in new road projects, he was calling for more investment in infrastructure for cycling and walking.

In the current crisis more people are working from home and some of that should be continued when the country returns to normal, as it would alleviate some of the congestion on our roads, he added.

Mr Ryan also said he was confident any new government would follow through on the Climate Action plan.

“I would expect any new government to introduce that within the first 100 days. I take that as a given, and I think the other parties have agreed that. I don’t see any problem introducing that. The question is what is the scale of ambition of change.”