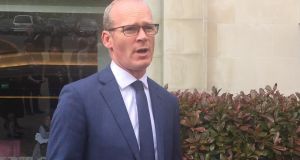 Tánaiste Simon Coveney has urged the people of Cork city to come out and back a plebiscite to allow for a directly-elected Lord Mayor.

The Minister for Foreign Affairs said it would give Ireland’s second city the opportunity to move ahead of Dublin in terms of significant local government reform.

Mr Coveney said he believed the plebiscites in Cork city, Limerick and Waterford on Friday gave people living in all three areas an opportunity to effect the most dramatic change in Irish local government since the foundation of the State and he cautioned against rejecting the reform.

“I think it would be a lost opportunity for Cork because I think we are likely to see a directly-elected Lord Mayor in Dublin in the not too distant future,” said Mr Coveney.

“This would have been an opportunity for Cork to go first and I think what you will see if people vote against this, they may be looking for another plebiscite when they see how a directly elected mayor is working in Waterford or Limerick or potentially in Dublin and they will want it here.

“I think it would a real missed opportunity if Cork doesn’t decide to go first here because there is I think a kind of first mover advantage here for a city like Cork.

“Cork is the size of our second, third and fourth cities combined and Cork is going to provide a counterbalance to Dublin over the next two decades.

Mr Coveney acknowledged the argument that the plebiscites may have been lost in the midst of local election and European election debates and the divorce referendum. However, he still believed it was the correct decision to run it with the other three votes.

However, there was a risk in holding the vote separately that it would result in a very low turnout. While he acknowledged there did not appear “a huge appetite for an argument on the issue”, he did sense people were curious and interested in the proposal even if they were not attending public meetings about it.

Minister of State for Local Government John Paul Phelan said the Government did not have to hold the plebiscite and could have introduced directly-elected mayors by legislation but they wanted to consult with people in Cork city, Limerick and Waterford and hear their views.

He said there was “a natural synergy” to holding the plebiscite on local government reform in Cork, Limerick and Waterford on the day that people in those local authorities were being asked to elect their public representatives and he hoped people would avail of the opportunity to embrace the change.

Mr Coveney said it was “frustrating” that much of the commentary has been foussing on the mayoral salary of €129,854. He argued that this was necessary to attract candidates of the calibre necessary to serve as mayor with powers to effect change in policy areas, rather than fulfill just a ceremonial role.

He pointed out that Fine Gael, Fianna Fáil, Sinn Féin, the Labour Party, Social Democrats and Greens were all in favour of the proposal and the only people opposing the change were “a small number of individuals on the hard left and that tells its own story.

“The Lord Mayor of Cork (if directly elected) will be the most influential position in Ireland outside of Cabinet. The aim is to revitalise urban development in Ireland along the lines of European and North American cities. It will be a completely different way of doing local government,” he said.

However, Solidarity dismissed the mayoral plebiscite as “a gimmick”.

Cork Solidarity Cllr Fiona Ryan said that if the Government was serious about making local government truly democratic, it would have restored its powers and provided it with proper funding.

“That would mean reversing the privatisation of the bin collection, restoring power over water and providing enough funding to massively increase local authority house building The parties that have stripped local government of its powers are the parties that are supporting the mayor gimmick,” she said.