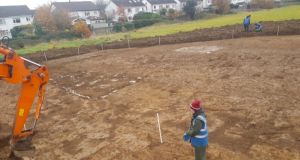 An excavation project on the 16-acre site identified a ring-fort settlement likely from the medieval period.

An archaeological dig at land previously owned by former taoiseach Liam Cosgrave has uncovered an extensive medieval burial ground of more than 80 bodies, alongside historical artefacts such as iron knife fragments and pieces of pottery.

Developer Ardstone Homes is seeking to build more than 600 homes on the Scholarstown Road site, in Knocklyon, south Dublin. The 16-acre site was previously owned by Mr Cosgrave, where he lived in a small bungalow, and the land was bought by Ardstone last year.

A significant excavation project, started late last year under licence from the Department of Culture and Heritage, identified a ring-fort settlement likely from the medieval period.

The full archaeological report, seen by The Irish Times, states that 83 human burials were uncovered at the site. Among artefacts unearthed in the dig were a possible iron knife fragment, a whetstone used to sharpen blades, pins made of bone and copper alloy, and fragments of pottery thought to be from the late medieval period.

The report, drawn up by archaeological consultants Archer Heritage Planning, was submitted to the department late last week.

The settlement included a rectangular structure and evidence of hearths, which suggested the presence of a home, the report said. A number of animal bones were also discovered amid the settlement.

Aidan O’Connell, an archaeologist on the dig, said the settlement discovery was a “significant early medieval site in the wider south Dublin region”.

The archaeological site spanned several periods, likely ranging from “the time of St Patrick up until the Normans”, Mr O’Connell said. This time period ranged from around 450 to 1200 AD, he said.

It had previously been reported in the media the burial ground contained remains dating back to the Bronze Age, but that was not borne out in the report.

The vast majority of the human skeletons were located together in a clustered cemetery area, the report said. A sample of one bone dated from between 617AD and 688AD.

The size of the settlement, and of the burial ground, would not be unprecedented, Mr O’Connell said.

Archaeological work at the south Dublin site has now finished and Ardstone Homes is to push ahead with its application seeking planning permission from An Bord Pleanála under a fast-track planning process.

The human remains removed from the site, along with the artefacts, will undergo specialist testing and radiocarbon dating, to establish more precisely what period they come from. After that it is likely all the findings of the archaeological excavation will be deposited in the National Museum.

A final report, including results from the radiocarbon dating, is expected to be completed in early 2020.

Previously Minister for Culture and Heritage Josepha Madigan said there was “no basis” for giving the Knocklyon land legal protection under the National Monuments Acts.

The discovery of the past medieval settlement was “not a unique or unusual site, but instead is quite common”, she said.

1 Fatal police shooting in Kentucky cuts to heart of community divisions
2 ‘Summer is not lost’ - Taoiseach announces accelerated easing of coronavirus restrictions
3 Coronavirus: People to be allowed to travel anywhere in their county from Monday
4 Donald Trump is in trouble, and that could spell very bad news
5 Pubs reopening will not mean ‘fellas having a few pints and peanuts’, Holohan warns
Real news has value SUBSCRIBE