‘We, as a county council, effectively had a gun put to our heads,’ Cllr Derry Canty says 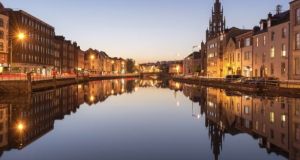 The Cork Local Government review group had recommended an even more expansive extension, which would have seen Killumney outside Ballincollig, Little Island and Carrigtwohill in east Cork also become part of the city.

A number of councillors from Cork County Council have strongly criticised a proposed deal, which will see Cork city expand into the county.

They have claimed the deal is undemocratic as local residents in the affected areas have not been consulted and had no input in the decision.

Fine Gael Cllr Derry Canty, who represents Ballincollig, and Fianna Fáil Cllr Bob Ryan, who represents Blarney and Tower, both strongly condemned the agreed expansion of the city, which would incorporate all three areas as well as Glanmire and Cork Airport into a new expanded city council area.

“Tim Lucey and his team, and we, as a county council, effectively had a gun put to our heads - it was basically a case of accept this compromise or else it’s a case of reverting to Eoghan Murphy making a ministerial order approving the Mackinnon report expansion where we would have lost even more.”

The Cork Local Government review group, chaired by former chief planner for Scotland Jim Mackinnon, had recommended an even more expansive extension, which would have seen Killumney outside Ballincollig, Little Island and Carrigtwohill in east Cork also become part of the city.

Cllr Canty said he fully appreciated that Mr Lucey was doing his best to retain a financially viable council and Killumney, which is home to EMC Dell, and Little Island and Carrigtwohill, were all important sources of commercial rate revenue for the county council.

“The crucial point is that Tim Lucey had no option but to agree to it - we were given an ultimatum to accept that Ballincollig, Blarney, Cork Airport and Glanmire are going into the city and if we didn’t accept it, Little island and Carrigtwohill would be brought into the city as well.

“Effectively, we had to cut our losses and Ballincollig and Blarney were sacrificed so that the county could retain Little Island and Carrigtwohill, and have some sort of decent rate base to fund services across the county - there was no real negotiation and we could do nothing about it,” he said.

Cllr Ryan was equally forthright, saying that Blarney and Tower were not even up for negotiation last week but something changed over the weekend where both areas again became bargaining chips in the talks with the Mackinnon report again being held over the county council to force a deal.

“I have no doubt but that the people of Blarney and Tower and the surrounding rural areas were sacrificed to the city for the rate income from Little Island and Carrigtwohill - the people I represent were sold out in order to hang on to the rate base - it’s as simple as that,” he said.

Cllr Ryan said he fully supported the principle of Cork city being allowed expand into the county but it should be done on a logical basis whereas what had been agreed was “idiotic and farcical” with country communities in and around Tower and Blarney set to be administered from Cork City Hall.

“The expansion to include rural villages like Blarney and Tower is absurd - it makes no sense - for example the extension doesn’t include the planned development in Monard which is 7km from the city centre and yet includes Blarney and Tower which are 9km and 11km from Cork,” he said

“The line of the proposed Northern Ring Road through Kilbarry, Killeens and Clogheen would have made a lot more sense - this deal takes no account of the topography of the area or of local identities in parishes like Blarney and Inniscarra, which is going to be cut in two if Tower is included.

“And Cork city is going to end up with thousands of acres of farmland, which it will never develop in a 100 years and people living in these areas are going to end up looking to Cork City Hall to provide by-roads , which we are struggling to provide as it is, it’s a farce and people had no input or say on it.

“There is something fundamentally wrong when we as councillors, who were elected to represent people in these areas, could not vote on the proposal. It has not been endorsed by councillors so there’s nothing democratic about this - it’s more diktat than democracy,” he said.