Policeman killed in Wexford crash ‘went through life with a smile’ 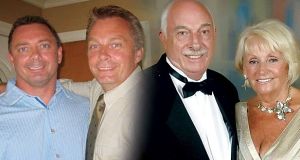 Steve Alexander (left) his brother Doug jnr and their parents Doug and Lily died in a collision on the N25 Rosslare to Cork road near New Ross on Monday.

A colleague of one of the four people killed in a car crash in Co Wexford on Monday, US policeman Stephen Alexander, has described him as “an unbelievable officer”.

Lieutenant Anthony Columbus, who worked with Mr Alexander Bolingbrook Police Department in a southwestern suburb of Chicago for 17 years, said he was “an exemplary officer who took pride in everything on a daily basis”.

Mr Alexander, a father of two, died in a collision close to Cushinstown on the N25 Rosslare to Cork road on Monday evening along with his parents Doug and Lily Alexander, and his brother Doug junior (52).

The family are understood to be from Oakland, near Chicago, though Mrs Alexander came originally from Limerick and was back in Ireland to attend the funeral of her Wexford-based sister, Winnie Keevey.

The crash happened at about 6.30pm on Monday on a wide open stretch of the N25 east of New Ross. It appears the driver of the Alexander’s BMW 5 series rental car, which was travelling towards Wexford town, pulled left onto the hard shoulder and paused. It then made a sharp turn right, as if to make a U-turn back towards New Ross.

However, it was hit side on and with great force by an articulated lorry, which was also travelling in the direction of Wexford town. Both the car and lorry came to a standstill on the far side of the road, the car almost totally obliterated.

Steve Alexander was nominated as Police Officer of the Year in 2014 and 2015, received the Life Saving Award in 2013 and was also a recipient of the department’s Top Gun Award.

Lt Columbus said the police department will never get over the loss as Steve Alexander was “more than a fellow officer, he was a friend to all of us.

“He was an awesome father and his children were his pride and joy,” he said.

“Steve went through life with a smile on his face. He made you feel better as a person.”

Lt Columbus also said that on behalf of Bolingbrook Police Department he wanted to thank gardaí and emergency personnel who responded to the crash.

He said they will be forever grateful for their professionalism and their efforts to help Steve Alexander and his family.

Steve Alexander had two daughters, aged 11 and 10. On Tuesday afternoon, his partner Susan Schulze paid tribute to him in a Facebook post.

“I can never express the happiness Steve gave me. He showed me true love. I am so blessed that to be a part of his life. I love you Steve and I will love you forever and a day.”

Bolingbrook PD Director Ken Teppel said that Mr Alexander “was an exemplary officer who took great pride in his law enforcement career and who devoted himself to protecting and serving the citizens of Bolingbrook.

“Steve will be missed by all those who had the pleasure of knowing him and we will forever keep the Alexander family in our thoughts and our prayers.”