UN disability rights convention to be ratified after 10-year delay 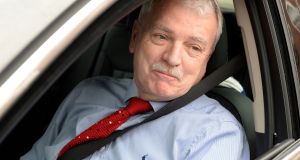 Minister for State with responsibility for disability issues, Finian McGrath, welcomed the development and said it was an important day for people with disabilities and their families. File photograph: Eric Luke/The Irish Times

The Cabinet agreed on Tuesday to formally ratify the UN Convention on the Rights of Persons with Disabilities after 10 years of delays.

States that have signed up to the convention are required to promote, protect and ensure the full enjoyment of human rights by persons with disabilities and ensure they enjoy full equality under the law.

Ireland was one of the first countries to sign up to the convention in March 2007, but is now the only European Union member state yet to ratify the framework.

Formally ratifying the treaty would make the convention legally binding for the Government.

Minister for State with responsibility for disability issues, Finian McGrath, welcomed the development and said it was an important day for people with disabilities and their families.

“I am delighted that my colleagues in Government have supported me in deciding that the convention should be ratified by Ireland as soon as possible. We will be returning to this at the next Government meeting to put the formal process in train and I am confident that all the necessary administrative processes will be completed within a few weeks,” said Mr McGrath.

The convention obliges states that are party to it to “promote, protect and ensure the full and equal enjoyment of all human rights and fundamental freedoms by all persons with disabilities and to promote respect for their inherent dignity”.

The Independent Alliance TD will also bring forward legislation for approval relating to the rights of individuals admitted to residential institutions, which is required to allow Ireland ratify the treaty.