Coronavirus: Up to 20 arrested for spitting or coughing at PSNI officers 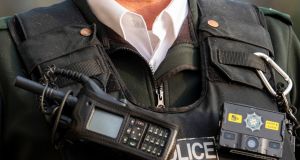 ‘For those on the front line, for sound health reasons, we must have every protection available.’ Photograph: Liam McBurney/PA Wire

Between 10 and 20 people have been arrested for spitting or coughing at police officers in Northern Ireland during the coronavirus outbreak, the Police Service of Northern Ireland has said.

The incidents happened over the last week to 10 days.

On Thursday a 33-year-old man who had been arrested following a collision in the Creggan area of Derry intentionally coughed in the direction of two police officers while he was in a police car.

He had previously stated he had symptoms of coronavirus, also known as Covid-19. He was arrested on two counts of attempted grievous bodily harm with intent.

Assistant Chief Constable Alan Todd said “anybody who spits at one of my staff can expect to be arrested and put before the courts at the first opportunity”.

The numbers involved were “small”, he said, “but one is one too many”.

“It’s abhorrent at any time, but it’s really abhorrent at this current time,” he said, “and they can expect to be arrested and taken off the streets and put before the courts.”

The chief constable and the North’s Policing Board announced on Friday that spit and bite guards are to be introduced to protect police officers in custody suites.

“For those on the front line, for sound health reasons, we must have every protection available,” said Mark Lindsay chairman of representative body the Police Federation for Northern Ireland.

The PSNI will have new enforcement powers in relation to coronavirus as a result of the emergency legislation introduced to deal with the outbreak.

Mr Todd said they expected to receive the information on these powers on Friday or Saturday, but they expected they would be broadly in line with those in England and Wales.

He said he did not expect police would be called upon to enforce social distancing and other measures introduced to prevent the spread of coronavirus.

In the case of businesses that failed to introduce social distancing, Mr Todd said the police would enforce this “only in extremis. I would expect it would be resolved long before the police would become involved.”

The assistant chief constable added that contingency plans were in place to ensure the PSNI could maintain its level of operations even if significant numbers of staff fell ill or were unable to work because of coronavirus.

Shift patterns have been changed and some overtime expenditure made available. “We have other plans where we can mutually support various parts of the organisation as required,” he said.

There are no plans to bring back retired police officers.

“One of the working assumptions across policing is that you could have up to 35 per cent of your people off at any one time,” Mr Todd said.

“One of the other working assumptions, and we’re already seeing this, is that your day to day demand on policing goes down ... which is helpful in a time like this, and that 90 plus per cent of the population will comply with the social-distancing arrangements.

“So if a significant amount of crime, road traffic and even economy demand goes down, and the vast majority of people do as they are asked, that helps as part of a control to make sure the police aren’t overwhelmed,” he said.