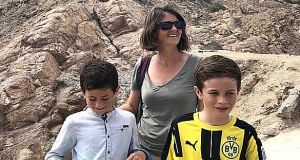 Christina Park with her two boys, Cathal and Oisín Whelan.

Unable to leave their holiday apartment in Peru, following a national lockdown order, Christina Park, her husband and their two boys have, nevertheless, enjoyed the kindness of strangers.

The family, who will be among those returning on Sunday’s repatriation flight, first heard news that coronavirus had spread from China when they were in Ecuador during a year-long South American adventure.

“We had just made it to this famous surfing town, just north of Trujillo, when the Peruvian government announced a complete lockdown. No one was to leave their house except to buy food, medicine or other essentials.”

Dreams of continuing to Machu Picchu, Lake Titicaca and the Atacama Desert evaporated, she said. And people on streets were ordered home by soldiers.

The news had seemed “very distant” until the sudden crackdown.

“With very few reported cases in South America, we felt we had weeks before movement might be restricted. When we saw hotel staff in Guayaquil, Ecuador, wearing surgical masks, we were bemused – our main worry being that it might frighten the children,” she said.

Later, in Cuenca, Ecuador, the family heard a radio commentator “telling everyone to relax over Covid-19, that the danger was being inflated to distract from the problems of corruption, a commonly held view in South America”.

Though restricted in their movements, the family has benefitted from kind-heartedness.

“We have found local people to be considerate, open and kind in what is also an extremely difficult situation for them,” said Ms Park.

Army on the streets

The young couple running their Airbnb apartment told them they they could stay for as long as needed.

“As a gesture of solidarity in the current crisis, they even offered us a substantial discount on our daily fee. Concerned for their young daughter’s safety, they are carefully observing social distancing,” she said.

“It can be intimidating seeing the army combing the town several times daily, with their surgical masks and AK47s, but they wave and say ‘hola’ when they see you carrying your shopping bag. It is frustrating looking out at the forbidden beach, but it’s reassuring that [it] is being taken seriously here. The measures have come in swiftly and are being enforced strictly. Maybe the country can avoid the worst of it.”

In the beginning, Ms Park said she had mentioned to a local that people in Ireland and France were being told that they could go for a walk as long as they did not come close to other people .

“We don’t have the health system they have,” replied the local. “If you had the situation here that you have in France [the number of Covid-19 cases], it would be chaos. The system couldn’t cope. So they can’t afford to let it take hold.”