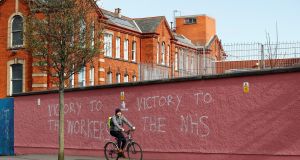 A cyclist passes in front of the Royal Victoria Hospital in Belfast with graffiti supporting the NHS. Photograph: Jason Cairnduff/Reuters

Six more people have died in Northern Ireland from coronavirus, the North’s Public Health Agency has reported. This brings the number of deaths in the North to 28.

The latest testing has resulted in 53 new positive cases bringing the total number of confirmed cases in Northern Ireland to 586.

Meanwhile, health and safety inspectors in the North have recorded a nine-fold increase in complaints following the outbreak.

An “unprecedented” volume of calls have been received about social distancing and Covid-19 in the workplace, the watchdog said.

Guidelines have been put in place for manufacturers after some employees at poultry producers Moy Park briefly walked out over health and safety concerns.

The Health and Safety Executive in Northern Ireland (HSENI) said: “HSENI has received approximately a 900 oer cent increase in complaints and a very high volume of requests for information and advice.

“This is an unprecedented volume of calls, the majority of which have been about Covid-19 and social distancing in the workplace.

“We are aware our colleagues in the local councils have been receiving requests for assistance as well.

“Our staff are dedicated and are working tirelessly to deal with each and every call we receive to achieve the outcome which best protects workers health and safety.”

Measures introduced to support businesses include a reduction in rates, a tax imposed by Stormont’s ministerial Executive.

On Tuesday, the North’s Minister for Finance Conor Murphy said he and his colleagues had received an extra £912 million (€1.03bn) to deal with the effects of coronavirus as part of steps announced by Westminster.

HSENI said it is working with companies to ensure compliance with the guidelines.

It added: “Our inspectorate staff are contacting businesses in response to raised concerns to ensure that measures are put in place to maintain social distancing and minimise the risks associated with Covid-19.

“Given the range of work sectors HSENI deals with, the implementation of these measures can be complex.

“This approach is allowing us to prioritise resources, rapidly raise concerns and point to appropriate measures which need to be taken.

“Inspectors are requiring employers to provide evidence of the measures being taken.”

The “vast majority” are said to be complying with requests.

The organisation added: “We have examples where production lines have been extended, break times staggered, canteen tables restricted to one per person, increased cleaning and physical measures such as Perspex panels to minimise contact have been introduced.”

It said voluntary temporary closures were being introduced in sectors such as construction.

Sinn Féin Assembly member Colm Gildernew said: “Any employer that does not make arrangements to protect workers must be held to account.

“It is my firm view that during this public health emergency, the Health and Safety Executive must be proactive to protect and promote the health and well-being of workers and their families.” Additional reporting: PA