The five Cultural and Educational Panel seats in the 2020 Seanad election have been filled after the 18th count. Video: Houses of the Oireachtas 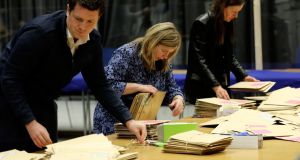 Former Sinn Féin MEP Lynn Boylan was set to be elected to the Seanad along with Cathaoirleach Denis O’Donovan in the ongoing count for the agricultural panel.

They came in just behind horticulturist and Independent Senator Victor Boyhan, who topped the poll in the ongoing election with 89 votes and was elected on the fifth count, reaching the quota of 93 votes.

Green Party Senator Pippa Hackett was in fourth place and in contention to hold onto the seat she won in a byelection.

Eleven Senators will be elected out of 26 candidates from an electorate of just under 1,200 TDs, Senators and city and county councillors.

Two of the four former TDs seeking to remain in the Oireachtas will not make it. Former Fianna Fail TD Kevin O’Keefffe was eliminated in the ninth count with 37 votes and former Fine Gael TD Pat Deering was next in line for exclusion with 40 votes.

However former TD Niall Blaney looks set to return to the Oireachtas for Fianna Fail. His father Harry Blaney served as a TD and his uncle Neil Blaney was a Fianna Fail minister sacked

Fianna Fáil Senator Paul Daly is in a strong position while there was a high vote for Sinn Féin’s second candidate Cllr Gerry Murray.

Labour candidate Cllr Annie Hoey secured all nine votes from her colleague former Labour TD Dominic Hannigan, who was eliminated on the third count. Mr Hannigan’s candidacy was not ratified by the party.

Also in contention is Senator Paddy Burke, who got the highest Fine Gael vote with 63 votes.

Earlier, Minister of State Sean Kyne a former Galway West TD was the first Senator elected to the new Seanad.

He said it was a great honour to be elected and praised the Oireachtas staff for their work in difficult and unusual circumstances.

Most candidates and their agents stayed away from the count at Dublin Castle at the request of staff to protect against coronavirus. Fianna Fáil’s Brexit spokeswoman Lisa Chambers and the party’s former Wexford deputy Malcolm Byrne were elected on the 16th count. Mr Byrne was only elected to the Dáil in the November byelection, serving just over two months.

Despite the first count putting her in second place, the Green Party’s Saoirse McHugh, a high-profile former European election candidate, could not secure sufficient transfers to win a seat.

Counting of votes for the National University of Ireland (NUI) and Trinity College Dublin (TCD) university panels, which elect six Senators, continued until late on Tuesday – a first count is expected on Wednesday morning. All outgoing Senators are seeking re-election. The coronavirus “cocooning” rules resulted in registrar Dr Attracta Halpin taking over as returning officer for NUI Chancellor Maurice Manning, who was forced to stay at home because he is over 70.