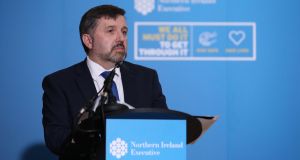 The North’s ministers are to consider imposing localised lockdowns on in parts of Northern Ireland in an attempt to halt the spread of coronavirus.

It is one of a wide range of measures aimed at tackling the increasing number of cases which are expected to be discussed at Thursday’s Executive meeting.

Robin Swann said he is to recommend at the meeting that some restrictions be tightened, and ministers must decide “whether these measures will apply to Northern Ireland as a whole, or to more localised areas with higher rates of prevalence of Covid-19”.

He did not want to preempt the Executive’s decision, he said, but he was “confident that ministers will agree with me on the need for action”.

“The message is simple, folks. The summer is over,” he said at a press conference at Stormont on Wednesday. “We have decisions to make on how we stem a disturbing increase in Covid-19 cases.”

The number of cases, he said, had been “rising sharply”, as had the percentage of positive tests, and Northern Ireland had “reached or even passed the stage where neighbouring jurisdictions have imposed localised restrictions”.

“To be blunt, if a foreign country had our figures, we would be imposing quarantine on anyone returning from us.”

Both the North’s first and deputy first ministers indicated that their preference would be to reintroduce restrictions in the worst-affected areas, rather than across the North as a whole.

The greatest number of cases in the last week have been in Belfast.

First minister, Arlene Foster, said ministers would have a “full discussion” on Covid-19.

“You have seen limited lockdowns in other parts of the UK and the Republic. We haven’t had to do that thus far, we may have to do that again tomorrow,” she said.

Michelle O’Neill, the deputy first minister, said she believed it was “inevitable” that Northern Ireland would be “moving very quickly to local lockdowns that’s going to be required in order to protect people”.

The North’s department of health (DoH) reported 49 new cases of coronavirus yesterday (Wednesday), with 607 new cases identified in the last week. The total number of confirmed cases since the beginning of the pandemic now stands at 7,957.

There were no further coronavirus-related fatalities reported on Wednesday, leaving the department’s total at 567.

The North’s Chief Medical Officer, Professor Ian Young, said the average number of cases per day now stands at over 90, compared to four at the beginning of July.

Compared to the rest of the British Isles, he said, the number of cases in Northern Ireland was “substantially greater . . . our position is worse than England, Scotland, Wales or the Republic of Ireland at present”.

The minister also warned students returning to university not to hold house parties, describing it as “highly irresponsible” and “highly dangerous” behaviour which could spread the virus among other students and among their parents and grandparents if they travel home for the weekend.

The police said they arrested five people in the Holylands area of south Belfast early on Wednesday morning after they received reports of groups of young people gathering in residential addresses, playing music and drinking in the street.