Brexit: Irish view is that British sabre will be put away and deal will be done 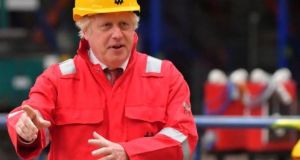 If you’re going to rattle your sabre, there’s no point in giving it a minor tinkle; you may as well make a bit of noise with it. Photograph: Ben Birchall/PA

The Taoiseach, Tánaiste and Minister for Foreign Affairs were on the same page this morning, united in criticism of the British government’s plan to unilaterally set aside aspects of the withdrawal treaty and insisting that negotiations on a trade agreement could not proceed on the basis that the UK might ignore those parts of an agreement it didn’t like.

“Meaningful negotiations can only proceed on the basis of mutual trust,” Micheál Martin said.

Simon Coveney described the developments in London as “an extraordinary change in approach from the UK government”.

Leo Varadkar said that the statement of the Northern Secretary Brandon Lewis that the British government intended to “break international law in a very specific and limited way” was an “extraordinary statement to hear from a cabinet minister in a respected liberal democracy”.

The Irish sentiments have been echoed publicly and (in more pungent terms) privately across the EU, which now has a high-stakes decision to make: can it continue to negotiate a trade agreement with the UK when it is in the process of violating the previous withdrawal agreement the two sides signed less than a year ago?

In Dublin, while preparations for a no-deal outcome are accelerating in the knowledge it is now a more realistic prospect than ever before, the predominant view – though by no means the only one – remains that the British government will ultimately seek to agree a trade deal, because it will not wish to accept the massive economic disruption that would result from a no-deal. The Irish Government, in other words, expects its British counterparts to act rationally in line with its own interests in the end.

And while there are parts of the Conservative Party and of broader British society has a different view of their interests than purely economic, and that will accept significant economic dislocation as the price for disengaging completely from the EU, it is not thought that this is the view at the top of the British government.

After all, trade between countries – such as will exist between the UK and the EU in the future – requires rules and rules must be mutually agreed and that requires trust they will be adhered to. People at all levels of politics and officialdom, here and in the EU ask: how can the UK expect people to make agreements with it if it casually discards the bits it doesn’t like?

In this view, then – which holds that the British government is not, actually, a rogue actor on the international stage, merely threatening to act like one – the British actions of recent days are “sabre-rattling”, and to be understood as such. Expect much more of this in the coming weeks, this view says; expect many more noises about how the UK is prepared for no-deal and how the UK will hold firm, whatever the cost; and then expect to do a deal, in the end.

This after all, is what Theresa May did, twice. Then Boris Johnson did it last year. As to the statements in the House of Commons yesterday, well, if you’re going to rattle your sabre, there’s no point in giving it a minor tinkle; you may as well make a bit of noise with it. You may even take it out and wave it around a bit. But ultimately the Irish view is that the sabre will be put away, and that the British will accept that jaw-jaw is better than war-war.

And senior Irish officials had been privately warning their political masters prior to this week of the likelihood of such British manoeuvres as the talks head for their decisive stage.

But the progress of the talks has been minimal; the two sides remain separated by a chasm. The mad scramble for an agreement as the clock ticks down towards deadline has been a characteristic of the Brexit process since it began. The Irish side expects that pattern to be repeated. But there is no doubt that the view is held somewhat more nervously now.

WHO warns about risks of ski holidays and Christmas gatherings 21:44
Cavan priest will not be ‘dictated to by pagan government’ 21:21
President praises Church of Ireland for making St Fin Barre’s a place of inclusion 21:14
Government offers suggestions on how to navigate Christmas safely 21:08
Coronavirus: Nphet warns against socialising after reporting 306 cases 20:13