Taoiseach rules out immediate restrictions for Dublin and Limerick 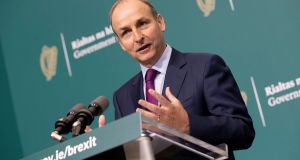 Taoiseach Micheál Martin said there would be “significant conditions attached” to how pubs reopen and that being in a pub would be a “far different experience”. Photograph: Julien Behal Photography/PA Wire

Taoiseach Micheál Martin said there was a lot of concern about the rising numbers of Covid-19 infections in Dublin and Limerick but ruled out immediate local restrictions for the two counties.

Mr Martin said the Government’s longer-term plan for managing the virus, which is due to be launched next Tuesday, would “deal more comprehensively” with spikes in Covid-19 cases in the two counties.

“No specific decisions have been made in relation to those counties right now and Nphet will continue to monitor the situation,” he told reporters at a press briefing at Government Buildings.

There will be a Covid-19 cabinet meeting on Thursday where this would be discussed “in great detail,” he said.

The message to people in Dublin and Limerick was to remain “very vigilant, socially distance, reduce your social contacts,” he said.

The Government had learned from regional responses like the local restrictions in Laois, Offaly and Kildare last month but that did not mean it would apply the same response in other counties.

Tánaiste Leo Varadkar questioned the need to introduce restrictions in Dublin and Limerick when the incidence of Covid-19 cases is higher in Belfast or other European cities.

“As a citizen and resident of Dublin and a minister responsible for business and employment, I would want a very good justification for that from the public health people as to why we would do anything more drastic in Dublin or Limerick than is being done in other cities around Europe that may have a higher incidence,” he said.

Asked whether the Government was considering similar measures to Glasgow where people are restricted from visiting other people’s homes to stem infections, Mr Varadkar said that he did not know whether they had worked and that there would need to be an analysis of them first.

Mr Varadkar said that the public managed to reduce the virus to very low levels earlier in the summer with public health measures and that people need “to step that up and intensify that” to avoid any new restrictions.

Mr Martin said the decision to open pubs that do not serve food was made in consultation with the National Public Health Emergency Team and the acting chief medical officer Dr Ronan Glynn.

The decision was made to reopen the pubs because they had suffered financially and that there would be “significant conditions attached” to how they reopen and that being in a pub would be a “far different experience” than before the coronavirus pandemic.