Cork to host major War of Independence commemoration next year 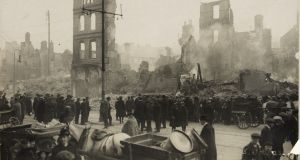 The burning of Cork in 1920. Photograph: WD Hogan/National Library of Ireland

Taoiseach Leo Varadkar has confirmed Cork will host a major State event next year to mark the centenary of the War of Independence, including the deaths of two of the city’s Lord Mayors and the burning of the city by British forces.

Mr Varadkar said that he believed it was only fitting that Cork should host a state commemoration given the part that both the city and the county played 100 years ago in the fight for Irish freedom.

“We are going to recognise the sacrifice of two of Cork’s Lord Mayors, Tomas MacCurtain and Terence MacSwiney and also the burning of Cork in December 2020 by having the major state commemoration next year here in Cork city.”

Mr Varadkar said he fully agreed with the call by Fine Gael Senator, Colm Burke, who is running for the party in the forthcoming Cork North Central by-election, to honour Cork’s role in the struggle for independence in this way.

Senator Burke said Cork was central to Ireland’s fight for freedom 100 years ago and the sacrifice that its citizens had made should be recognised by the state as part of the Decade of Centenaries.

“Next year, Cork will be central to the story of the Decade of Centenaries. In March 1920 the Lord Mayor of Cork, Tomás MacCurtain, was assassinated in his home in front of his pregnant wife, who later suffered a miscarriage.

“His successor, Terence MacSwiney, was arrested, jailed and died on hunger strike in a British prison in October 1920. Today bronze statues of MacSwiney and MacCurtain stand on either side of the entrance to Cork City Hall.

“When I was elected Lord Mayor of Cork in 2003, I brought along my 97-year-old cousin, Pat Curtin, a cousin of Tomas MacCurtain, and I was deeply honoured to be following in the footsteps of such distinguished predecessors.

“Their vision of Irish freedom should continue to inspire us, across all parties and none and I believe it is imperative we commemorate the deaths of our two Lord Mayors with appropriate respect and solemnity in next year’s centenary.”

Senator Burke paid tribute to the work of Cork City Council, led by the current Lord Mayor, Cllr John Sheehan to plan ahead for the anniversaries of the many events which happened in Cork during the War of Independence.

“Cork bore witness to some of the fiercest fighting in the birth of our State. There were many events in Cork in 1920 as part of the War of Independence, including a number of significant ambushes which are known worldwide.

“The year culminated in the Burning of Cork in December 1920, when the city suffered massive destruction, with much hardship and suffering and a state event here in December 2020 would be an appropriate way of marking that.”

Senator Burke pointed out that when President Michael D Higgins spoke at Beal na Blath in 2016 he noted Ireland won admiration as a ‘beacon for other struggling peoples’ around the world.

“The struggle and sacrifice in Cork in 1920 is an integral part of that story and it is only right that the State officially commemorates Cork’s significant history in that regard,” he added.

Tanaiste Simon Coveney said that no figure had been agreed yet by the government on the funding it would provide for the state commemoration in Cork but talks would begin shortly with Cork City Council.

“We don’t have a figure yet but that will be an ongoing conversation between the government and Cork City Council but there is a commitment to put a decent fund in place to make sure it is done properly,” he said.

“Cork City Council has already put a lot of work into how those events can be appropriately commemorated and a commemoration committee is already in place - my job is to make sure they get the funding from national government.”