The Irish Government must convene an all-Ireland forum and a Border poll on Irish unity must be held in the next five years, the Sinn Féin leader Mary Lou McDonald has demanded. Video: Sinn Féin 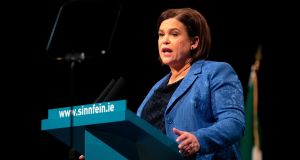 The Irish Government must convene an all-Ireland forum and hold a poll on Irish unity in the next five years, Sinn Féin leader Mary Lou McDonald has said.

In her keynote speech to the Sinn Féin ardfheis in Derry on Saturday night, Ms McDonald also called for a “new deal” to increase pay, tackle the housing crisis, improve childcare, health and education options, address the challenge of climate change and plan for Irish unity.

She also told delegates that Sinn Féin was prepared to enter coalition in the South and was “ready to do business” with the DUP and the British and Irish governments and the other Northern parties to restore Stormont.

Ms McDonald said Sinn Féin stood on the “threshold of a new decade, a decade of opportunity”.

“And let the message go loud and clear to Government Buildings in Dublin and to 10 Downing Street that this new decade is the one in which we will finally end partition to achieve a new united Ireland,” she said

“The Irish Government must convene an all-Ireland forum to map the transition to a united Ireland, to involve all the people, to plan for our economy and our public services and then the referendum must happen in the next five years.”

“Many people, for the first time, are now considering their future in a United Ireland. The Irish Government and all who say that now is not the time to speak of unity are wrong. A referendum on unity will happen, as set-out in the Good Friday agreement. It is not a question of if, but a question of when.”

Ms McDonald said it was “unsustainable” that the Northern Executive and Assembly were not sitting. “We are ready to do business. Sinn Féin has never been the obstacle to powersharing or good government or doing a deal. I challenge the DUP and both governments to step forward, to resolve the issues and get government back in action.”

Ms McDonald also made clear that Sinn Féin wants to be in government in the Republic but other parties needed to “tell us if they are willing to implement a republican programme for government”.

“Following the general election, we have a choice to make. Not about being in government for the sake of it but about how we best implement our policies - our solutions. In arriving at this decision, we should be guided, not by our distrust of other parties, but by our confidence in republicans.

“After the election, we will talk and we will listen. Our preference is for a left-led government.”

Ms McDonald called for support for the Sinn Féin candidates in the forthcoming by-elections in Cork, Wexford and two Dublin areas and for Sinn Féin candidate John Finucane in the Westminster general election in North Belfast as he seeks to oust the DUP’s Nigel Dodds.

“Some claim they will enter Westminster to stop Brexit. Those making this claim need to give themselves a shake. No Irish elected representative can stop Brexit. That’s the fact . . . No Irish republican would swear an oath to the crown.”