British attempts at propaganda were undermined by real images 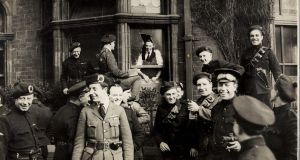 There is nothing new about fake news. The first casualty of war is the truth and this was certainly true of the War of Independence.

A new photographic exhibition on the war shows it was as much a battle of competing narratives as a war.

The exhibition, compiled by the National Library of Ireland (NLI) from its own archives, includes a section on fake news. The British deployed fake news throughout the war to assure their public at home that it was going well. Unfortunately, they were not very good at it.

The front cover of the London Illustrated News from November 17th, 1920 shows two IRA volunteers dead after what became known as the Battle of Tralee. It did not take long for the photograph to be revealed as a fake. It had been staged at Vico Road in Dalkey.

The exhibition also highlights a notorious front page from the Daily Graphic which shows three IRA leaders, Dick McKee, Peadar Clancy and Conor Clune trying to escape their captors in Dublin Castle by shooting their way out.

The photograph is almost certainly a fake as the men would have been disarmed after they had been arrested and were therefore powerless. It is now thought more likely that they were summarily executed in retaliation for Bloody Sunday on November 21st, 1920 where 14 British agents were shot dead by Michael Collins’s squad.

The exhibition entitled From Turmoil to Truce: Photographs of the Irish War of Independence demonstrates the importance of the propaganda war which was nearly as significant as the war itself in bringing the British to terms.

The war was one of the first guerrilla conflicts to be fought in an era of newspaper photography and news reels.

The British had a well-resourced publicity machine and the support of most of the home press. The underground Republican government had the Irish Bulletin, a single sheet bulletin telling the war from an Irish perspective which was smuggled out to sympathetic foreign correspondents.

The British tried to fake the Irish Bulletin but, as another exhibit demonstrates, they proved out to be hopeless at it and there were telltale typographical errors which gave the game away.

The British ultimately lost the propaganda war because the camera does not lie and it was impossible to fake the photographs of the burning of Cork in November 1920 or the sacking of Balbriggan in Dublin in September 1920.

A photograph in the exhibition shows members of the American Commission for Evidence of Conditions in Ireland walking through a ruined factory in Balbriggan. The commission did much to galvanise the American political classes into supporting Irish independence.

There are also photographs in the exhibition of a woman thrown out of her home in Longford and a large shop premises after it had been burnt out by the Black and Tans.

The biggest propaganda victory of the war though was the death of the lord mayor of Cork Terence MacSwiney on hunger strike in Brixton Prison. Photographs of MacSwiney’s emaciated corpse - publications were much less circumspect about displaying dead bodies 100 years ago - were circulated around the world.

The upstairs section of the exhibition is devoted to his death and there are many arresting images including the front cover of the French magazine Le Petit Journal with the strapline which needs no translating - Le Martyr Irlandais.

MacSwiney’s death on October 25th, 1920 saw him become the personification of a David v Goliath contest. The New York Times called his death a “gesture of deep tragedy on a stage where all mankind looks on”.

Eventually disquiet about the conduct of the war spread to the British public with Clementine Churchill telling her husband Winston, then the home secretary, that she was ashamed of the “ rough iron-fisted ‘hunnish’ way” of British forces in Ireland.

The happiest photographs in the exhibition are from the Truce of July 11th, 1921 which ended the War of Independence.

The exhibition at the National Library of Ireland’s national photographic archive runs from Tuesday, November 19th until next May.