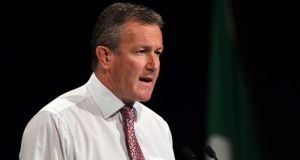 The restoration of the North’s power-sharing Assembly is still possible, the Sinn Féin MLA Conor Murphy has told the party’s ardfheis.

Speaking to delegates at the conference in Derry, the MLA for Newry and Mourne said this was dependent on all parties approaching dialogue “in the same spirit that secured the Good Friday Agreement 21 years ago.”

He said it was now “make your mind up time for the DUP” and Sinn Féin remained ready to engage in political talks.

Northern Ireland has been without a power-sharing government since January 2017, when it collapsed following a row over a botched renewable heating scheme.

The party’s Northern leader and vice president Michelle O’Neill said on Friday that she believes that following the general election on December 12th there will be an opportunity in the new year to restore the Assembly.

Referring to the confidence and supply agreement which was agreed between the DUP and the Conservative Party following the general election in 2017, Mr Murphy said the “DUP/Tory pact” was “the biggest single opposition to the restoration of the institutions.”

Now, he said, “as Gerry Adams had predicted, it has all ended in tears. The lessons of Parnell, Redmond and even Carson continue to be lost on those who think they can influence Westminster in their interests.”

Mr Murphy told delegates that Sinn Féin wanted “genuine sustainable power sharing with all of the parties taking their place at the Executive” and “the promise of Good Friday” fulfilled. “The sooner we get down to that task that better for us all,” he said.

He was one of a number of Sinn Féin elected representatives who spoke to the thousand-strong crowd at the party’s ardfheis in the Millennium Forum in Derry on Saturday morning.

The Upper Bann MLA, John O’Dowd, who is challenging Ms O’Neill for the position of vice president, spoke on a Bill of rights. “Media reports of my demise have been much exaggerated,” he said as he took to the stage.

In an apparent reference to the SDLP’s candidates, Ms O’Neill said “one or two isolated MPs in Westminster cannot make a difference” and urged those present to re-elect the party’s seven MPs and an eighth, the current lord mayor of Belfast, John Finucane.

“Joining the magnificent seven will be John Finucane as MP for North Belfast,” she said.

A number of speakers, particularly those from Border counties, stressed there must be no return to a hard Border.

“There will be no hard border between Donegal and Derry or Tyrone and Fermanagh ever again,” said Senator Pádraig MacLochlainn. “Those days are over, the future lies in a united Ireland.”

The TD for Sligo-Leitrim, Martin Kenny, was greeted with a standing ovation as he took to the podium.

Earlier this month his car was destroyed in an arson attack outside his home in Ballinamore, Co Leitrim. He had supported a proposal to accommodate asylum seekers in Ballinamore, despite a protest from a local community group.

He appreciated everyone who had sent good wishes “and who were there for my family during this period.”