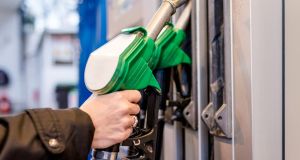 Minister for Transport Shane Ross said ‘the most important transformation in transport will be the replacement of conventionally fossil-fuelled vehicles with cleaner more efficient alternatives’. File photograph: Getty Images

Ireland’s move towards reducing carbon emissions will move a step closer on Monday when passengers will make their first journey on a “green bus” during a trial run from Cork city centre to Ringaskiddy.

Minister for Transport Shane Ross said the trial with passengers aboard is on a bus fuelled by biomethane, recovered through anaerobic digestion which not only generates energy but also supports a more circular economy through the use of waste as a resource.

“The most important transformation in transport will be the replacement of conventionally fossil-fuelled vehicles with cleaner more efficient alternatives,” he said. “This is a formidable adjustment but one that with vision, investment and resilience can set Ireland on the right path to decarbonisation and cleaner air.”

Thumbs down for diesel

The trial run, support by Energy Cork and Cork Chamber, who have campaigned for a move to alternatively fuelled technologies, will mean the bus collects passengers at Lapp’s Quay in Cork and brings them to the Marine and Renewable Energy Ireland centre in Ringaskiddy.

Mr Ross said last year that Ireland would no longer purchase traditional diesel fuel public buses after June 2019 and the Government has been seeking alternatives.

Ireland is under pressure to reduce its carbon emissions.