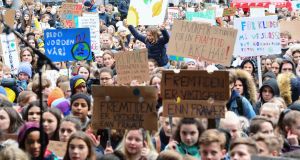 Thousands of children are set to skip school on Friday in protest over inaction on climate change, but their actions are posing a dilemma for school principals and teachers.

Should students be encouraged to have their voices heard on the most important issue facing the planet? Or would endorsing the strike mean schools risk exposing children to a range of health and safety risks?

The Department of Education’s advice is that school boards of management are responsible for making decisions over the types of activities they get involved in.

“The safety and welfare of students should be paramount in all matters involving school students during school hours,” a spokesman said. “The department would urge school management to ensure students are given as much guidance and advice in relation to safety before engaging in the climate action strike on March 15th.”

The National Association of Principals and Deputy Principals’ advice , meanwhile, is that it is “acceptable to let children express themselves”, as long as there is close consultation between students and teachers.

Many schools have opted to facilitate the day of action by providing bus transport for some classes to demonstration sites. Others are hosting lunch-time demonstrations outside schools or local civic offices and dedicating classes to climate issues.

Some principals, however, are fearful of an unplanned walkout of students and feel the Taoiseach’s comments in support of the strikes may be taken as a green light by pupils to skip school.

“His comments weren’t helpful as we’re trying to maintain a balancing act of allowing the student voice to he heard and protecting their welfare,” said one principal, who declined to be named.

Jonathan Browner, principal of North Wicklow Educate Together Secondary School, said it was transporting its second year class to the protest in Dublin with the consent of parents. “In our case, this was a project driven by second years . . . We’re clear this is one of the most important issues facing society,” he said.

Mount Temple Comprehensive School in Clontarf is facilitating parents to give permission for their children to strike. The school, fortuitously, has a half-day on Friday in any case. The principal, Liam Wegimont, acknowledged that it was a tricky balancing act but said the school was “not neutral” on the issue.

“We need to recognise that these issues are crucial for the future, so we need to enable our students – those who want to be involved – to have their voices heard.”

The Schools’ Climate Action Network, which is helping to organise demonstrations, said a growing number of schools had chosen to support and accompany their students who had decided to take part. However, it pointed out that “these schools cannot take any responsibility for students who are not in their care”.

Dr Lorna Gold, a lecturer at Maynooth University and author of Climate Generation, said the dilemma facing schools was that Friday’s demonstration was not a once-off.

“This is something that will be sustained over many months until we see radical climate action,” she said. “They can’t be seen to sanction walkouts but they also need to engage . . . This can’t be shut down. Ultimately, we should be celebrating the fact that our young people are actively engaging with this.”