Over €228,000 spent on prefabs for Cork primary school amid extension delay 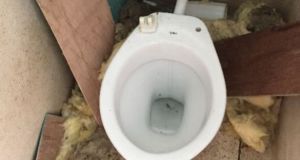 A toilet at Charleville CBS in Co Cork, where part of the roof recently fell in.

The Department of Education has spent more than €225,000 on prefabs for a Co Cork primary school as a result of delays in building an extension, the school’s principal has said.

Fianna Fáil leader Micheál Martin said there needed to be a more integrated approach to school refurbishments after meeting the principal, Michael O’Sullivan, who said €228,000 has to date been spent on temporary accommodation at his school, Charleville CBS.

The principal last week said he would not allow his staff and pupils to return to the “dire” classroom conditions in the school after the Easter holidays unless the department provides plans for a replacement school building.

“There have been delays in progressing both a six-classroom extension at a cost of €1.1 million and an upgrade of the existing building at a cost of €900,000, and in the meanwhile Mr O’Sullivan is being offered more prefabs which have now cost a total of €228,000,” said Mr Martin, a former minister for education. “It’s just not an efficient use of money.”

Mr O’Sullivan said work on the proposed extension was due to start in 2015 and that the department had provided at that time two prefabs for a year at a cost of €37,000.

However, work has yet to start on the site and the prefabs are still being used four years later after an initial installation cost of €80,000, giving a total expenditure of €228,000 to date.

“Our numbers have gone up, and are set to go up so dramatically next year from the 2015 figure that [a] six-classroom extension isn’t going to be sufficient for us, we will need an eight-room classroom extension, so it’s being long-fingered again and we’re being offered another two prefabs,” Mr O’Sullivan said.

The principal said the department had always been positive in its response to the school’s request for an extension.

“I’m not saying that they are not giving us the money but it takes so long for the process to happen – it could be six months before we get a reply to our letters and every time the building costs per square metre have gone up so you have to go back to the start again.”

A spokeswoman said the Department of Education “had been advised of the concerns raised and is contact with the school to progress the matter”.