Cork floods: ‘This shouldn’t have happened... It was a very low tide’ 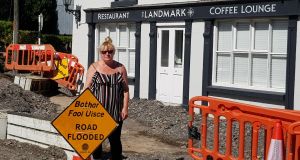 Marcelle Leonti, owner of the Landmark restaurant in Roscarberry, surveys the flood damage to her business.

“Storm Ophelia did no damage at all – we didn’t get a drop of water coming in and you don’t expect to be flooded in August but this has done huge damage, we had 2ft of water in here Thursday morning and all the fridges and freezers are gone, the deli counter, the ice machine, all gone.”

Marcelle Leonti was in reflective mood as she surveyed the damage at the Landmark restaurant and guesthouse in Rosscarbery. It has been almost a week since torrential overnight rain flooded the elegant two-storey building which she bought in 2017.

“I was very upset – it’s very distressing – we spent quite a lot of money here since we bought it in 2017 and it was going well but this shouldn’t have happened really. It was a very low tide so it was just rainfall but the mud and silt went everywhere as the stream overflowed the culvert.” She pointed to a heavy wooden picnic bench that was carried almost 500m away by the flood to the carpark of the Celtic Ross Hotel, where she retrieved it days later.

Her neighbour, John Hayes, is a native of Rosscarbery and said the last time his terraced house in Newtown was flooded was in 1963, when high tides, a southeasterly wind and heavy rain left the area under several feet of water.

“There was no high tide the other morning and no winds, it was dead calm – it was all down to the rain and the culvert here under the road being unable to take the run-off, so it overspilled on to the road and backed up. I came down at 8am to discover four inches of water in my sittingroom.”

Across the road, neighbours Mossie O’Donovan and John Stringer were assessing the damage to their holiday homes in the town’s 19th century courthouse which was flooded, and where everything from floor boards to furnishings had to be thrown out.

“We weren’t here at the time but one of the neighbours rang to say there was about a foot of water in her livingroom and we were all more or less the same, under a foot of water. It all came from the stream over there because the culvert couldn’t take the volume of water,” said O’Donovan.

“But we’ve had ferocious rain before and never had any problems. It seems the stream has filled up with shale and silt, it couldn’t take the volume of water that was coming down the channel and it spilled out across the road,” he said.

“My wooden floors have all warped and buckled from the flooding so they will all [have] to go as will the furnishings and fittings – I’ve lost a cooker, a fridge a washing machine. I’m waiting for the insurance assessors to come back with a figure but it will run into thousands of euros.”

Earlier, Patrick O’Donovan, Minister of State at the Office of Public Works, visited Rosscarbery and other parts of west Cork where he met people affected by floods.

“It is only when you see the damage first hand that you can fully appreciate the devastation the recent severe weather has brought to communities in Connonagh, Dunmanway and Rosscarbery,” the Minister said. He also discussed the issue with Cork County Council chief executive Tim Lucey.

“The extent of the damage to the road network and infrastructure needs to be carefully examined by the relevant professionals and I would like to assure the communities affected that funding will be made available to deal with the aftermath of this destruction,” he said.