Cork Film Festival to open with ‘Float Like a Butterfly’

Over 250 feature, documentary and short films to screen over next ten days 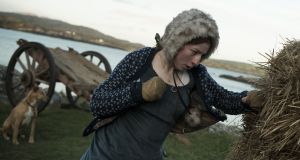 A promotional image for the film Float Like a Butterfly.

It’s a long way from Kanturk to Kentucky but that’s the metaphorical journey that Cork film director, Carmel Winter has made with her film ‘Float Like a Butterfly’ which on Friday night opens the 63rd Cork Film Festival after scooping an award at the Toronto International Film Festival just two months ago.

Kanturk-born Winter uses her second feature film to tell the story of young Irish Traveller girl Frances who, inspired by the Louisville Lip himself, Muhammad Ali, decides to challenge the life planned out for her by her father, Michael and in the process delivers a blow to the stereotype of Irish Traveller women.

“In Ireland, to have a young female Irish Traveller at the centre of a film, where she is a champion – not a victim – of her destiny is unthinkable for most people. And for her to take on the Muhammad Ali mantle of being ‘The Greatest’ was experienced by some almost as a blasphemy.

“That’s the kind of challenge that inspires me to make a film. It’s film as magic, making the impossible possible. I wanted to create an image of the future as if it has already happened. And to celebrate the ‘Great Female’ as we did in our ancient past,” Winter recently told the website, Seventh Row.

Already garnering numerous glowing reviews since screening at Toronto, Float Like a Butterfly, which stars Hazel Doupe as Frances, is having its European premiere at the Everyman Palace theatre tonight which prompted Winter to remark that she couldn’t have wished for a better home coming.

According to Cork Film Festival producer and chief executive, Fiona Clark, she and festival programme director Michael Hayden saw their mission as one of creating an unforgettable festival experience for film fans over the ten days, bookended by Float Like a Butterfly and the closing film, Capernaum.

“Our closing Night Gala is the Irish premiere of Nadine Labaki’s multi-award-winning film ‘Capernaum’, which took the Jury Prize at Cannes Film Festival which and tells the courageous story of a 12-year-old boy in Beirut who sues his parents for bringing him into a world of poverty,” Clark told the Irish Film and Television Network.