Should be run by mature staff, not idealistic young people who burn out, says Alice Leahy 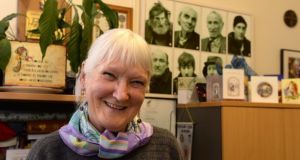 Dublin needs a very basic shelter for the homeless where no questions are asked, said Alice Leahy, director of services at Dublin’s Alice Leahy Trust. She has been helping homeless people and rough sleepers for over 40 years.

“Somewhere like a warehouse which is heated and with sleeping bags, where people can go and get shelter and there is no pressure on them to give information,” she said. This would apply particularly to those who had been drinking, she added.

“And it should be run by mature staff, not idealistic young people who believe you can change people and then burn out,” she said. “They have to get it into their heads people are not going to change.

“You are dealing with complex individuals and they can’t be controlled like that.”

Ms Leahy was speaking following the death of Michal Waskiewicz, a Polish man in his 40s, whose body was discovered on Dublin’s Cook Street near Christ Church Cathedral at about 8am on Tuesday.

Another Polish man who had shared a sleeping bag with Mr Waskiewicz on Monday night arrived at the Alice Leahy Trust premises in Dublin’s Liberties on Tuesday morning. “He was in a terrible state. He said they had been told go away from the Merchants Quay Project.”

Both men had been drinking. They shared a sleeping bag at Cook St and when the man woke up Mr Waskiewicz “was dead beside him,” she said.

When the man arrived at the Alice Leahy Trust he was shaking, she said. “He had a cigarette, cleaned himself up, and then he left.”

A spokesman for the Merchant’s Quay Project said that Mr Waskiewicz had a place booked for Monday night but that there had been a fracas as people queued at the centre between 10 and 11pm.

Gardaí were called and everyone dispersed. Mr Waskiewicz did not return to the centre to take the place he had booked.

“We have to get it into our heads people are not going to change,” said Ms Leahy, “and that they are a person first, not a client or a case or a statistic.”

People could “read all the books they like and do all the courses but what was needed was a very, very basic shelter where people can sleep overnight, get up and ramble off again,” she said.

Last Monday, the 30 people who called to the Alice Leahy Trust centre were of eight nationalities “including five [people] who were new to us and had been in the Phoenix Park”, she said.

“People tell us that Dublin is the best place to be homeless,” she said. They find that “people in the city are very kind. They won’t go without food and, usually, they can get accommodation. They are treated better here”.