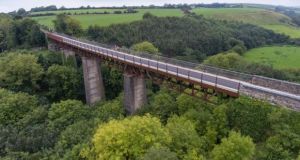 The Waterford greenway runs along an old railway. Proponents of the Cork plan have said the greenway has the potential the replicate the success of Waterford which is attracting close to 250,000 visitors annually.

Cork County Council is to vote on Monday on plans for a €15 million greenway along the route of a former rail line in east Cork.

The proponents of the plan have said the greenway has the potential the replicate the success of the Waterford greenway which is attracting close to 250,000 visitors annually.

Cork County Council management is seeking Part 8 planning permission from councillors for the development of a 23 km greenway.

According to Cork County Council, the project involves the development of a high quality, linear greenway for cyclists and pedestrians along the route of the disused railway line between Midleton train station through the villages of Mogeely and Killeagh to the former Youghal railway station.

The plan also involves the greenway traversing Ballyvergan Marsh near Youghal where it is proposed to create a boardwalk structure over a distance of about 2.58km.

This will form a wildlife viewing point over this varied habitat which already contains a number of bird hides, the council said.

The council has received over 300 submissions from the public in relation to the project and support from several local councillors but the Green Party in east Cork has opposed the move and said efforts should be made to try and re-open the rail line for commuter services to Cork city.

The rail line between Midleton and Youghal opened in 1860 with regular passenger services operating daily until 1963 before they were reduced to a popular summer Sunday service which ran until 1987, with all freight services ceasing a year later in 1988.

However Liam Quaide of the Green Party in Youghal said that traffic congestion was a major quality of life issue for thousands of commuters travelling the N25 from east Cork to Cork city every day and a commuter train service from Youghal to link up with Midleton rail service offered a sensible solution.

Former Cork South Central Green Party TD Dan Boyle said that “the promise that the greenway could be returned to use as a railway line in the future if the need arises is a hollow one. We run the risk of throwing the railway out with the bathwater here.”

However several local East Cork councillors have already expressed their support for the project with Midleton Fine Gael Cllr Susan McCarthy telling the Evening Echo that she fully supported the project and cited the success of the Waterford greenway as an example of what could be achieved.

“The greenway would cost between €10 million to €15 million and it would be a local amenity for the area as well as bring tourism to the region. . . There are three bike rental facilities along the Waterford greenway. There is eight full-time staff and 20 seasonal, the amount of employment is phenomenal.”

Independent Cllr Mary Linehan Foley from Youghal, who previously campaigned to get the rail service reopened, said that repeated attempts to get Iarnrod Éireann to re-open the line over the years have proven unsuccessful and developing a greenway there now made sense.

“In a dream world, everyone would love a railway line in Youghal but it is not going to happen,” Ms Linehan Foley said. “We have tried it, we are flogging that horse with the last 20 years trying to get it back to Youghal. It just wasn’t going to happen,” she said.

But Green Party leader Eamon Ryan told a public meeting in Youghal attended by 200 people last May that Youghal should press for both a greenway and a re-opened rail line with the former running beside the track as frequently happens in the US where there are “trail and rail” beside each other.

“What needs to happen is that when you are putting in the greenway, rights of way are maintained - you need three to four metres for the greenway and then another six metres for the rail and we should aim for that as it would allow for the prospect of the rail line coming back,” he said.