Multinational firms concerned over standard of foreign languages among school-leavers 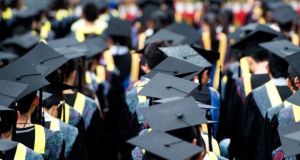 Satisfaction levels with the quality of higher education graduates and further education and training graduates are virtually neck-and-neck, a new report has found. Photograph: Getty Images

Graduates from apprenticeships and Post-Leaving Cert (PLC) courses are rated as highly as graduates from universities and third-level colleges, according to a major new study.

The findings are contained in a survey of more than 700 employers carried out last year by education authorities, which is due to be published soon.

When these figures are broken down, employers rate further education graduates slightly higher than college graduates in areas such as team-working, commercial awareness and entrepreneurial skills.

These findings will likely be seized on by the further education and training sector as a vote of confidence in the quality of PLC courses, apprenticeships and traineeships.

Overall, the report finds that companies generally are very satisfied with the standard of graduates.

However, multinational firms based in Ireland are least satisfied over the standard of foreign languages. Satisfaction rates are also relatively low for graduates’ entrepreneurial skills.

These findings are likely to be of concern at a time when Government policy is focused on boosting the standard of language learning among school-leavers, given the United Kingdom’s looming departure from the European Union.

Employers are most satisfied with graduates’ computers skills; their ability to work effectively with others; verbal communication; numeracy; and written skills.

In terms of personal attributes, employers are most likely to rate highly students’ work ethic; reliability; positive attitudes and ethical and social awareness. They were slightly less likely to rate their ability to cope with pressure.

The report also examines what skills are likely to be in demand among employers over the coming years.

Companies say they are likely to need more graduates with computer literacy, management and engineering skills in the next couple of years.

At further education level, companies say computer literacy will also be in demand, as will demand for apprentices, such as carpenters, plasterers, mechanics, plumber, electricians. Skills in business/project management, and marketing/sales will also be sought after.

The Irish Universities Association said it was “delighted” there were such high levels of satisfaction with the quality of recent higher education graduates.

“Coupled with consistently high employment rates for Irish graduates, both at home and abroad, this demonstrates the quality of the learning and broader educational experience provided in Irish higher education,” said Lewis Purser, the association’s director of learning.

“The somewhat lower employer satisfaction rates with graduates’ language skills and entrepreneurial skills underline the need for increased outward mobility by Irish students to other countries for part of their studies, together with increased participation in work placements or engaged learning opportunities, and an increased focus on student project work and problem solving.”

He said the rapidly increasing numbers of young people entering third level, and a growing emphasis on lifelong learning for those already in the workforce, all show the need for increased public investment in Irish higher education, to underpin the country’s economic, social and cultural prosperity.