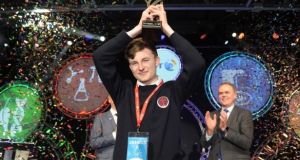 Adam Kelly from Skerries Community College is announced winner of the 2019 BT Young Scientist of the Year. Photograph: Aidan Crawley

The 2019 winner of BT Young Scientist & Technology Exhibition (BTYSE) Adam Kelly (17), a pupil at Skerries Community College, has suggested he may pursue a career in academic research rather than going to work for a big tech company.

At an event to celebrate the exhibition’s conclusion in the RDS, the fifth year student outlined how he plans to further develop digital tools and algorithms that enable processing of large amounts of data in much quicker ways compared to standard computers.

In helping to build the next generation of super computers deploying quantum mechanics, he told the biologist and science broadcaster Liz Bonnin he had recently tested his formulations in Ireland’s largest computer at the Irish Centre for High-End Computing in Dublin.

BT Ireland managing director Shay Walsh said that for 55 years the exhibition had shown the ingenuity of Ireland’s youth and this year’s exhibition was no exception. “The students have sought creative and innovative solutions to some of the world’s most pressing issues and that spirit and drive is to be commended.”

He congratulated all participants and the overall winner. “His work shows terrific initiative, dedication and brilliance in tackling an immensely complex area of modern computing.”

The event also paid tribute to Irish astrophysicist Dame Jocelyn Bell Burnell, who was awarded the Special Breakthrough Prize in Fundamental Physics recently in recognition of extraordinary scientific achievement. The prize recognised her discovery of magnetized rotating neutron stars known as pulsars – announced in 1968 – and her scientific leadership.

She has donated the $3 million prize money to fund women and under-represented ethnic minority and refugee students to become physics researchers, in an attempt to counter the unconscious bias she believes still exists in physics research jobs. “I don’t know it will make a difference. It will certainly make a point,” she told Bonnin.

Prof Bell Burnell outlined how girls in the 1950s were expected to take cookery lessons rather than pursue physics at secondary school. When she was admitted to Cambridge University she was overwhelmed by what she subsequently learned was imposter syndrome. “I believed they made a mistake in admitting me.”

She decided to put her head down, work hard and build a radio telescope, “until they throw me out”.

A total 56 per cent of qualified entrants for this year’s BTYSTE were female, with an increase of 62 per cent in the number of girls qualifying in the chemical, physical and mathematical sciences category this year.

Speaking during the exhibition, Rachel Higham BT managing director for information technology said it was “great to see the increasing number of girls’ teams” in the BTYSTE. She noticed a welcome trend of girls coming back over a number years and building on their research.

The exhibition had a global significance in providing insight into local, regional and social issues and helped BT in creatively using STEM (science, technology, engineering and maths) to solve issues. On its future, she said they always reviewed it each year, especially with a view to leveraging the platform to develop talent.

This was with a view to boosting the whole ecosystem, she added, so it was working with the Government, social organisations and other corporations to help create the workforce of the future.

In terms of technological advances, Ms Higham said as 5G cellular technology was realised within the next 18 months, it would allow BT to “mesh mobile networks with fixed networks and give ubiquitous connectivity”.

Artificial Intelligence was among other emerging technologies, which she accepted may have negative aspects if it was not used responsibly. This required telcos to invest in governance, in new skills and in spotting biases and correcting them, she added – otherwise there could be trouble. They had a unique position and needed to ensure trust, and protect customers, employees and other stakeholders from data breaches – in spite of “not having the same concentration of power of a Facebook”.