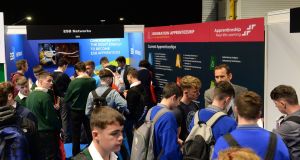 Industries facing acute skills shortages, such as the tech and construction sectors, are battling to attract school-leavers in the run up to this month’s CAO closing date.

Up to 70,000 young people are selecting their courses and career choices, with most set to apply before the closing date for discounted application fees (€30) which expires this Sunday.

The final registration deadline expires on February 1st, though students can revise their course selections up until July 1st.

The tech sector, in particular, is desperate to attract school-leavers in light of a recent skills audit which found there are some 12,000 vacancies across the industry as a whole.

Despite research which shows tech graduates earn the most out of college, the number of applications for these courses fell last year.

The construction sector, too, is seeking to ramp up the number of school-leavers applying for third-level courses, apprenticeships and traineeships linked to the built environment.

It says there are thousands of vacancies for roles such as civil engineers, construction project managers, quantity surveyors, as well as in trades for carpenters, shift managers and glaziers.

Both the tech and construction sectors are also emphasising the importance of the further education option and of apprenticeships as a route into their respective industries.

“This demonstrates clearly that in addition to traditional third-level routes, the further education and training sector can play an increasingly important role in addressing the immediate gap and foreseeable skills needs in Ireland,” he said.

A new alternative route into employment in the sector, for example, is a modern tech apprenticeship. The programme, formally known as the ICT associate professional programme, allows students to develop technical skills as well as entrepreneurship and business savvy through work experience.

“It is an exciting complement to the current availability of strong IT courses at third level,” he said.

The wider further education sector and apprenticeships are also hopeful of seeing new growth in applications this year.

While Ireland has the highest proportion of school-leavers in the EU who progress to third level, a series of new apprenticeships and further education courses are coming on stream.

Andrew Brownlee of Solas, the State body responsible for the further education and training sector, said momentum was growing for the sector.

“While the CAO process creates a lot of focus purely on higher education, we’re seeing there is a growing awareness of other entry routes into ICT, pharma, [and] construction through new apprenticeships and traineeships.”

He urged school-leavers to also examine websites for further education courses (fetchcourses.ie) and apprenticeships (apprenticeship.ie). Application deadlines vary, but are generally over the summer.

Latest figures on third-level graduates, meanwhile, show that graduates with a college degree are doing better than those without.

ICT or technology graduates had the highest average salaries – with almost 40 per cent of graduates earning €33,000 or more within nine months of graduating – and some of the highest employment rates.

By contrast, latest Higher Education Authority data shows arts and humanities graduates were the least well-paid and had lower rates of employment. A total of 15 per cent of graduates were earning less than €13,000.