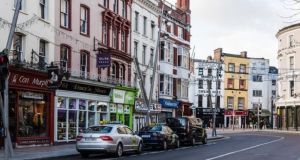 Many family-owned businesses in Cork city are facing extinction if Cork City Council does not start listening to traders’ concerns about the loss of parking spaces in the city centre, traders warn. Photograph: Getty Images

Many family-owned businesses in Cork city are facing extinction if Cork City Council does not start listening to traders’ concerns about the loss of parking spaces in the city centre, a traders’ meeting has heard.

Speaker after speaker at the meeting organised by the Cork Business Association warned that Cork city centre is in danger of losing many family owned firms if Cork City Council continues with plans to reduce the number of parking spaces in the city centre.

CBA Chief Executive Lawrence Owens said that plans by Cork City Council to remove 115 parking spaces on Morrison’s Island in the city centre as part of a public realm project for the area would have a devastating effect on city centre traders.

Speaking at a briefing by Cork City Council Director of Environment and Recreation David Joyce on the Morrison’s Island project, Mr Owens said the CBA supported the project as it included important flood protection work which would help prevent tidal flooding of Cork city centre.

Mr Owens said that the CBA had estimated that these 115 parking spaces accommodated 2,500 to 3,000 turnovers a week and almost 150,000 turnovers a year which was a serious loss of customers to a city still recovering from a recession, a crippling bus strike and two major weather events.

Added to this, Cork city centre was also losing a further 90 parking spaces in White Street off Douglas Street to facilitate social housing and a further 20 parking spaces were being lost on Sullivan’s Quay where a new hotel is being built and these were having a cumulative negative effect.

Former CBA President and English Market fishermonger, Pat O’Connell pointed out Cork had already lost city centre parking on the Grand Parade, Parnell Place, Oliver Plunkett St and Cornmarket St and he warned that a city without customers would end up “not as a city but as a graveyard”.

Mr O’Connell said that the council might argue that there was plenty of off-street parking in multi-storey car parks but these were putting people off as they were not always easy to access and were expensive with people having to pay over €3 every time they went even five minutes over an hour.

And he also criticised the existing on-street disc parking system, saying it did not make parking easy for visitors who have to go and buy discs and the council should seriously look at introducing a parking meter system like that currently operating in many towns in the county.

Photographer, Billy McGill, who operates on Winthrop St, said that many family-owned businesses which gave Cork its unique character and made it attractive to tourists would end up going out of business if people could not get convenient and cheap parking in the city centre.

Trader, Joe Cotter who runs Household Linens on Oliver Plunkett St said the city had also lost a substantial number of parking spaces to the city’s bike scheme but he had never seen “anyone on a bike coming in to buy a pair of pillows or a duvet” and customers needed parking for their cars.

Restaurant owner, Dave Halpin, who operates in both Cork city centre and in Douglas, pointed out that the city centre cannot hope to compete with suburb shopping centres such as Douglas, Mahon Point, Wilton and Blackpool when they can each offer free parking for several hundred customers.

Fellow restaurant owner, Mags O’Connor who runs The Cornstore on Cornmarket St pointed out that there were currently 13 vacant premises on Patrick Street and losing more parking spaces was going to do nothing to address the dropping footfall which was affecting trading in the city centre.

Bookshop owner, Joan Lucey of Vibes and Scribes said traders needed Cork City Council to come back to traders with specific proposals on how to address the parking problem by a certain date and Mr Joyce promised to raise their concern with Cork City Council Chief Executive Ann Doherty.