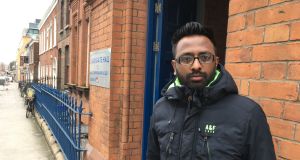 Visham Mahalappana (36), who was made homeless by the Metro Hotel blaze.

People made homeless by the Metro Hotel fire in Dublin last month have secured further emergency accommodation but say they are having extreme difficulty finding new homes.

A number of families, some of whom lost everything in the blaze at a Ballymun complex, presented to the Dublin Region Homeless Executive (DRHE) on Wednesday after two weeks of hotel accommodation paid for by Metro management ran out.

Some told The Irish Times that finding new rental homes had proved almost impossible, with the situation aggravated by the bank holiday weekend.

They feared being out on the street on Thursday with nowhere to go, before the executive agreed to provide further emergency accommodation.

Visham Mahalappana (36) had lived at the Metro complex with his partner since 2015. He has stayed in four hotels since the fire and said he had been “traumatised” by the experience.

Unable to find anywhere to live, he was initially told that he did not qualify for any assistance.

“I am working full-time, I pay my taxes, I have never claimed social [welfare], nothing,” he said.

He said he had spent the last two weeks trying to find a new rental home, making offers on 12 places, but was either unsuccessful or simply did not hear back from landlords.

Lynn Yang, a businessowner in her 30s, said she had experienced similar difficulties.

She had just returned from Beijing on the night of the fire and had endured, like others, two weeks of extreme stress in attempting to find somewhere to stay.

“Everybody was in shock, a lot of stress,” she said, adding that following the fire she had spent a lot of time on property rental websites. “But with the housing crisis in Dublin it’s very difficult to find somewhere.”

The hotel she had been staying in had offered her a discount but this would still leave her with an unaffordable bill of about €2,400 a month, she said.

Like others, she praised the community response in Ballymun, where the local SuperValu had held an Easter Sunday barbecue for the families and there had been donations of money and clothes.

Another woman who lived in an apartment that was totally destroyed said her 12-year-old son was badly traumatised by the fire.

“It’s everything in there, all my memories,” she said, showing pictures of the gutted interior of her apartment.

The families who presented to the DRHE were eventually given an offer by the executive of a week’s funded hotel accommodation, but what happens after that is unclear, and an ongoing source of concern.

“They [the executive] had no choice in the end because literally [the families] had nowhere to go,” she said. “It’s worrying. I don’t know where they are going to be next week. Some of them lost everything, they don’t even have ID.”

The DRHE said it had received “a small number of calls” in the immediate aftermath of the fire.

On Wednesday, it said “a number of families presented to our homeless Central Placement Service in Parkgate Hall.

“Due to the extenuating and difficult circumstances that these families have found themselves in, we will, in the interim, be providing emergency accommodation for all of those that presented today, pending assessment of their homeless applications.”

Only one family declined the emergency accommodation they were offered after presenting to the executive.