‘If you want to torture people, send them to A&E’ – southern nurses hit out at lack of plan 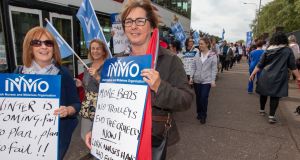 Nurses and midwives in Limerick and Cork fear they will have to deal with their busiest winter yet as the number of patients on trolleys continues to grow .

Hundreds of Irish Nurses and Midwives Organisation (INMO) members protested outside Cork University Hospital and University Hospital Limerick at lunchtime on Tuesday to highlight staffing shortages and the HSE’s lack of a winter plan to deal with the expected upsurge.

“If you want to torture people, send them into A&E,” said Brigid O’Donnell, who is nursing in Limerick for more than 20 years. “There aren’t enough nurses on the ground. We are bleeding nurses. Nurses are not giving even 50 per cent care to their patients because they don’t have time.”

Ms O’Donnell, from Doon, Co Limerick, said the hospital was “completely overcrowded”, without enough staff and beds, but this had become “acceptable. No one blinks an eye, any more, about 48-50 people on trollies. It’s become the norm.”

There were 48 patients on trolleys in Limerick on Tuesday, according to statistics published daily by the INMO.

Limerick INMO spokeswoman Mary Fogarty described the overcrowding situation at the hospital “an absolute disgrace. It’s a scandal. This is the most overcrowded hospital in the country, and it’s unacceptable.”

Ms Fogarty said she believes the crisis in Limerick will continue for at least “another decade” unless drastic changes are implemented. In the short term, and with winter approaching, Ms Fogarty said, “we are not going to see any light at the end of the tunnel”.

Senior Cork University Hospital staff nurse Jean O’Connell said she had worked at the Cork hospital for more than 20 years and she feared that this winter was going to be worst yet, as already there were large numbers of patients on trolleys .

“It’s September and we have 52 people on trolleys today. The emergency department figures did not drop significantly during the best summer we’ve had in years, and everyone is fearful that this winter is going to be much worse, particularly as the HSE have no winter plan in place,” she said.

There are currently 50 vacant nursing positions at the Cork hospital and a further 30 in the adjacent Cork University Maternity Hospital, with the 80 positions on the campus being filled mainly by agency staff, INMO industrial relations officer Liam Conway said.

“The HSE have used every measure to recruit and retain nurses bar pay, and pay is a significant factor,” Mr Conway said.

Ms O’Connell said many newly qualified nurses are opting not to enter the profession but embark instead on postgraduate courses.

Marie O’Brien, a nurse of 40 years, saw the extent of the crisis for herself when she visited the emergency department last October as a patient. “Outside it looked amazing …When I went inside, I was actually gobsmacked when I saw all the patients. It was like a war zone.”

Ann Noonan (51), from Adare who works as a theatre nurse at University Hospital Limerick, says she is “embarrassed” about what she earns. “I’m embarrassed to say I’m 34 years nursing and I’m earning €23 an hour.”

“At the end of my 39-hour working week, I get €700 into my hand. It’s very little considering it’s a very responsible job that we do.” Noonan and her husband are putting three children through college. “It’s catastrophic in UHL. The staff are demoralised and overworked.”