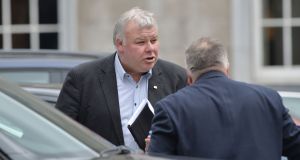 Michael Fitzmaurice said he will set up a meeting to bring the group of backers together on the day the Dáil returns next week. File photograph: Alan Betson/The Irish Times

Prospective candidates in the presidential election in October could still find an alternative route to nomination through the Dáil and Seanad, an Independent TD has said.

The Roscommon-Galway TD Michael Fitzmaurice has told The Irish Times he is confident he has assembled a group of 20 Independent members of the Oireachtas which could endorse a candidate.

Mr Fitzmaurice said he will set up a meeting to bring the group of backers together on the day the Dáil returns next week.

“We have the numbers. We will meet up on the day we come back and then progress it from there.”

There are two routes for a contender to become an official candidate under the Constitution - either being nominated by four local authorities, or by 20 members of the Oireachtas.

Mr Fitzmaurice said he has been in contact with TDs and Senators over the past few weeks. He said the system he envisages is that any aspiring candidate would address the group and its members would then vote on their preferred candidate. The person supported by most of the group would then be backed by all of the group.

“We would not be supporting or promoting the candidate. What we would be doing is facilitating them, using the aspect of democracy that is open to us.”

Mr Fitzmaurice accepted there would be time pressures involved to ensure its process would be completed by September 26th, the closing date for nominations. However, he said it could happen very quickly.

Some ten councils will make decisions on nominating presidential candidates in the next ten days. They include Cork County Council and Cavan on Thursday; Monaghan on Friday; as well as Kerry, Louth, Kilkenny, and Westmeath next Monday. Limerick will meet to decide the issue on Tuesday while South Dublin Council will meet on September 20th.

The businessman Gavin Duffy, who has three nominations, looks a certainty to be nominated, at the latest next Monday. Other contenders including Peter Casey, Gemma O’Doherty and Kevin Sharkey will hope to garner the support of four councils before the close of nominations in just over two weeks time.

On Monday evening businessman Sean Gallagher and Independent Senator Joan Freeman had each secured the backing of four local authorities to run in the forthcoming presidential election on October 26th.

President Michael D Higgins has indicated he will run for a second term while Sinn Féin is likely to endorse the Munster MEP Liadh Ní Riada as its candidate on September 16th.