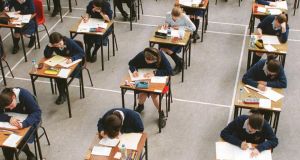 More than 62,000 Junior Cert students are set to receive their results today, with almost 50 pupils securing top marks across all subjects.

New limits on the number of subjects which students may take had led to a sharp increase in the numbers securing top marks, up from six last year to 47 this year.

The new junior cycle specifies that students may sit a maximum of 10 exam subjects (or 11, where CSPE – Civics, Social and Political Education – is taken as an exam subject).

Secondary schools are due to release the results to students today, though students may also access their results online from 4pm at the State Examinations Commission website – examinations.ie.

A breakdown of grades achieved by students shows that a pattern of achievement similar to last year.

This likely linked to the so-called “bell-curve” marking scheme, which is used to ensure the proportion of students who secured grades is similar year-on-year.

Notwithstanding this, there is likely to be concern among policy-makers at relatively higher fail grades in some subjects.

In ordinary level maths, for example, about 6 per cent of students – or more than 1,400 students – failed their exams.

Students have worked very hard to arrive at this point. They should make sure to enjoy the celebrations with family and friends, but they should do so responsibly

Similarly, failure rates at ordinary level for European languages are also relatively high, ranging from 7.4 per cent in French to 8.8 per cent Spanish.

While fail rates were generally lower for higher level subjects, the exception is history where almost 10 per cent did not pass the exam.

English, meanwhile, is marked under a new assessment and grading system which will be extended to other subjects over the coming years.

Under this system, the old grade format of As, Bs and Cs has been replaced by ranging from distinction and higher merit to merit.

There is no fail grade any more. Instead, students scoring below 40 per cent will be deemed to have “partially achieved” the subject.

Teachers’ groups and unions, meanwhile, have offered their congratulations to students due to receive their results today. They have also urged students to be responsible in their celebrations

Teachers’ Union of Ireland president Seamus Lahart said all students should be proud of their achievements.

“Students have worked very hard to arrive at this point. They should make sure to enjoy the celebrations with family and friends, but they should do so responsibly and not put the wellbeing of themselves or others at risk,” he said.

Clive Byrne, director of the National Association of Principals and Deputy Principals said today marked a starting point for preparation for the senior cycle and Leaving Cert.