Donald Trump visit to Ireland will not go ahead in November

US president Donald Trump visited the site where hijacked United Airlines Flight 93 crashed as the US paused to mark the 17th anniversary of the September 11 attacks that killed nearly 3,000 people. 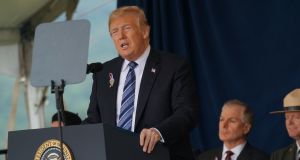 President Donald Trump, seen here speaking during a ceremony on the 17th anniversary of the September 11th terrorist attacks on Tuesday, has cancelled his planned visit to Ireland in November. Photograph: Doug Mills/The New York Times

The Government has announced that Donald Trump’s planned trip to Ireland in November will not go ahead, though the White House said no final decision had been made.

Confusion surrounded the status of the visit as the Government spokesman said that the trip had been postponed due to scheduling reasons on the US side.

But in a statement, the White House said that the details of the Ireland trip were still being finalised.

“The president will travel to Paris in November as previously announced. We are still finalising whether Ireland will be a stop on that trip. As details are confirmed we will let you know,” White House spokeswoman Sarah Huckabee Sanders said.

However the Irish embassy in Washington said it had been informed by the US State Department and the White House that the trip had been cancelled.

The conflicting official statements from the Irish and US governments were compounded by mixed messages from Paris about Mr Trump’s attendance at the Armistice celebrations.

A US source told The Irish Times unofficially “there’s a lot of email traffic between Washington and Paris - it looks like the trip to France is not going to happen”. But, the source cautioned, that too could change.

The White House announced at the end of August that the President would visit Paris to mark the centenary commemorations of the end of World War I, a trip that would also incorporate a visit to Ireland.

It is understood that in recent correspondence between Dublin and Washington, the White House had favoured a visit by the President on his way to Paris ahead of the November 11th commemoration.

This would mean the President departing Washington on November 9th, just days after the mid-term elections which take place on November 6th across the United States.

It is believed that Republican aides felt that a trip to Ireland so soon after the mid-term elections could send the wrong message. A number of polls over the last week have shown a drop in President Trump’s approval ratings, a trend that could spell difficulty for the Republicans in November. There are reports that senior Republicans are now seriously concerned that their party could face severe challenges in traditional red states such as Texas in November.

With the status of Mr Trump’s trip to Europe up in the air, Irish sources said that the President is highly likely to visit Ireland at a later point in his presidency.

The initial announcement by the White House of Mr Trump’s visit to Ireland took officials in Dublin by surprise. Taoiseach Leo Varadkar had said the announcement had come “a little bit out of the blue”.

Initial contacts with the embassy were only made two days before the official announcement, and details of the proposed visit had been changing constantly since the announcement of the trip.

On Tuesday senior Irish officials received informal indications from Washington that the trip might not go ahead. Several senior sources in Dublin knew nothing about the proposed cancellation on Tuesday afternoon.

The visit, which had been expected to attract huge protests, would have marked Mr Trump’s first trip to Ireland since his inauguration as President of the United States in January 2017.

He was expected to stop in Dublin and also visit the five-star Doonbeg Lodge and Golf Club in Co Clare which he bought for an estimated €15 million in 2014.

When the trip was announced the Labour party said that it would “join with like-minded people to oppose this visit.” Green party leader Eamon Ryan said the government should cancel the planned visit.

Mr Ryan welcomed the news on Tuesday that the visit was off. “The visit came out of the blue and has now been cancelled in the same erratic way. We are glad he is not coming. Trump’s positions and demeanour on every issue of the day, from climate to women’s rights, from international relations to political decency, represent the opposite of Green and indeed Irish values,” he said.

“It’s hard to know why the trip has been cancelled at this stage, but we are nonetheless glad that such a costly, potentially divisive and undignified event will now not take place,” he added.

Labour Senator Aodhán O Ríordáin welcomed the news too, saying it was as a result of the campaign against the visit.

“Clearly the outpouring of objections to this visit has had the desired effect as President Trump has decided not to come to Ireland. Mr Trump is the face of hate, racism and division. The organisation I helped found - Irish Stand - has consistently criticised the hypocrisy of Irish-Americans supporting this man considering the immigrant history of the Irish,” he said.