Dispute between the NI Police Ombudsman and Durham Constabulary has deepened 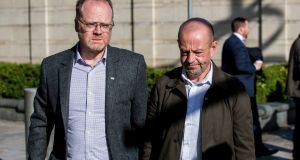 The dispute between the Northern Ireland Police Ombudsman and Durham Constabulary over the events surrounding the arrests in August of two Belfast journalists has deepened significantly.

Despite claims to the contrary from Durham, ombudsman Michael Maguire insisted his office had not made a complaint that documents featuring in a documentary about the 1994 Loughinisland massacre had been stolen from it.

The documentary No Stone Unturned was released in 2017: “We stand very much behind the statement we issued to The Irish Times – we did not report a theft,” a spokesman for the ombudsman said.

It had been clear “from the start that its investigation centred upon “theft, unauthorised disclosure and other linked offences which arise from [ombudsman’s office] reporting the inclusion of secret documents in a documentary”.

Durham maintains that the PSNI subsequently received a written statement of complaint about the theft from a senior officer of the ombudsman’s office. This is absolutely disputed by the Ombudsman’s office.

On foot of these complaints, according to Durham Constabulary, it was called in to investigate by the PSNI. Journalists Barry McCaffrey and Trevor Birney were arrested and their homes and offices searched on August 31st this year.

They were not charged but are subject to bail conditions and are to report for further questioning at the end of this month.

The escalating controversy, first reported in The Irish Times on Wednesday, arises over documents used by the film-makers that contain information that appears to originate in the ombudsman’s office. Lawyers acting for the journalists are now seeking to have their arrests declared illegal. The PSNI has declined to comment, citing ongoing legal proceedings.

Emma Rogan, whose father, Adrian, was one of the six men murdered by the UVF at Loughinisland in 1994, said the families were angry that police were placing such emphasis on the documents.

“Do the PSNI and Durham not realise that six people were wiped off the face of the earth, and that this film, along with Dr Maguire’s report, contained information that could help them to catch the murderers?” she said. “We have been down a long dark road to get some truth and justice. We are still traumatised.”