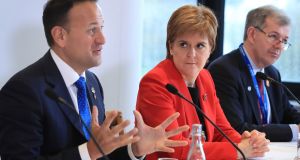 The Taoiseach Leo Varadkar has said a successful outcome to Brexit negotiations by Christmas is “more likely than not”.

In one of his most confident assessments of the process to date, the Taoiseach spoke of a a deal being possible, but not guaranteed, in the next few weeks.

Speaking at the British Irish Council meeting in the Isle of Man on Friday, Mr Varadkar also said that the views of all parties and interested organisations in the North should be considered, not just those of the Democratic Unionist Party (DUP).

However, in a press conference following the summit, Mr Varadkar did add a few caveats to his assessment. “I think it’s more likely than not that we will be able to agree an agreement in the next few weeks, before the end of the year. But lots of things can go wrong and even if we can agree before the end of year, bear in mind what’s agreed will have to be ratified [BY]Westminster and also by the European parliament,” he said.

“And even when all that is done, then we begin talks on the future relationship. There’s no clean break here, this could go on for a very long time.”

Speaking on the backstop, he said the most important objective was to give everyone in Northern Ireland and Ireland the assurance that a hard border will not develop.

Referring to the DUP, he said it was important to listen to its point of view but added: “There are other political parties as well. I note the concerns about the communications between the [British] prime minister [THERESA MAY]and the DUP. It is entirely appropriate that there should be communication on an issue of real importance to all of us.

The summit came as Mrs May faced a potential rift with the DUP over the contents of a leaked letter that appears to suggest she would sign up to a ‘backstop to the backstop’ that would mean a border down the Irish Sea with Northern Ireland in the EU single market regulatory regime.

DUP leader Arlene Foster said she will not support Mrs May’s decision to have a Northern Ireland specific backstop which will see a border down the Irish Sea.

She told RTÉ news on Friday evening the DUP will not support that and will not be able to support it in the British parliament.

“Our problem with the correspondence is that ... she’s confirmed that there’s going to be a Northern Ireland specific backstop and indeed that as regards her negotiating position, she’s going to have Chequers for the whole of the United Kingdom. In other words, we will have a different regulatory regime from the rest of the United Kingdom and essentially there is going to be a border down the Irish Sea and no unionist would be able to support that,” she said.

“It is very clear to me that Theresa May will have a job of work to do if she is going to get this through Cabinet,” said Ms Foster.

When asked if it the backstop is an insurance policy that may not ever be used, Ms Foster said: “Well if that’s the case, why have it there in the first place. Why risk the break up of the United Kingdom which she says she cares about very deeply,” she said.

Asked whether the Northern Ireland backstop would or would not feature in any withdrawal agreement, Mr Lidington said: “We don’t comment on alleged leaked documents but the position remains as it has always been. We are working with the commission to deliver on the commitments made in the joint report in December 2017. That means all the various commitments made in that report.

“And the Prime Minister has always been very clear that we won’t accept something that involves carving out Northern Ireland form the rest of the UK.”

Asked if he though any deal could win a majority in the Commons, Mr Lidington said: “I think we remain very determined to get a good deal that works for every part of the UK and which we also think will work well for the EU27. They are after all going to remain our closet neighbours in the world.

“In respect of the Irish border we remain committed to the approach set out in a very balanced way in the joint report of last December which in itself reflected the balance inherent in the Good Friday Agreement.”

Ms Sturgeon said: “I think one of the issues that still dogs these talks is the UK government appears to still be in the process of negotiating among itself rather than presenting a coherent unified position to the European Union. ”

She added: “My preferred option all along if the UK is leaving the EU, which I regret, is that it should seek to stay within the single market and customs union which will obviously resolve [the border issue] and the border between Ireland and Great Britain.”

She said the Brexit experience had exposed “real weaknesses” within the devolution settlement that will require to be worked through and resolved.

She said: “There have been frustrations on the part of the Scottish government about lack of engagement and involvement. Obviously we’ve had quite heated debate and discussions about power grabs, the devolved parliaments and issues around the powers of the devolved administrations are respected. There is no point in not being upfront about that.”

The DUP, which Mrs May relies upon for her Commons majority, earlier on Friday accused the prime minister of breaking a promise that she would never sign up to a deal that treated Northern Ireland differently from the rest of the UK.

It has interpreted the letter, leaked to the Times, as meaning that Northern Ireland could have a different regulatory regime to the rest of the UK under the Irish backstop clause.

The party has seized on a particular paragraph in which Mrs May said she could not allow circumstances or conditions that could break up the UK customs territory to “come into force”.

Ms Foster tweeted on Friday: “The PM’s letter raises alarm bells for those who value the integrity of our precious union & for those who want a proper Brexit for the whole UK. From her letter, it appears the PM is wedded to the idea of a border down the Irish Sea with NI in the EU SM [SINGLE MARKET]regulatory regime.”

The leak of the letter is seen by some observers, as well as the DUP, as part of a laying of the ground by the prime minister for a showdown with the party over checks in British ports, or factories in Northern Ireland or Great Britain.

Under the EU proposals, UK officials would be “competent authorities” to conduct the checks, but to EU rules, something the DUP has said will cross its “red line”.