You have to be kitten me! Purrfect end to cat-in-transit saga 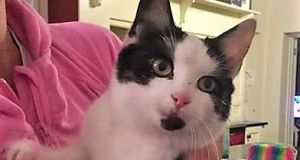 The black and white kitten has been taken to the DSPCA on Mount Venus Road in Rathfarnham. Photograph: DSPCA/Facebook

A lucky kitten has survived a more than 124-km journey inside the bonnet of a car from Co Dublin to Offaly this week.

The Dublin Society for the Prevention of Cruelty to Animals (DSPCA) said while it was a common occurrence at this time of year for cats to climb under the bonnet of cars to keep warm, it was unusual the six-month-old kitten survived travelling such a long distance.

On Wednesday afternoon, a driver left work in Dundrum Business Park, near Bird Avenue, and drove home to Offaly.

Shortly afterwards he came back out to his car and found a kitten sitting on the bonnet.

At first, he and his wife thought the kitten was local, but it kept running back under the car.

On contacting the DSPCA and making local enquiries, the man realised the kitten had probably travelled with him from Dublin.

Gillian Bird from the DSPCA said people should check to see if they were missing a kitten.

“This happens a lot, especially at this time of year. We always urge people to give the bonnet of the car a bang before they get in,” she said.

“In this case the cat was incredibly lucky, sadly all too often the outcome is not happy.”

The black and white kitten has been taken to the DSPCA on Mount Venus Road in Rathfarnham.