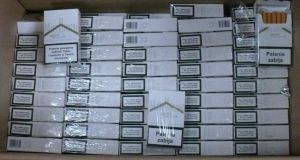 Ten tonnes of loose tobacco and 411,000 cigarettes have been seized by Northern Ireland Revenue officials in Newry.

HM Revenue and Customs officers, along with the Police Service of Northern Ireland (PSNI), seized the contraband at the site of an illicit tobacco factory.

The seizure of tobacco and cigarettes is believed to have an estimated value of £5 million in lost duties and taxes, customs officials said.

The cigarette packets seized had health warnings written in Polish on them. The raid of the factory took place on Thursday.

Steve Tracey, assistant director of fraud investigations at the Northern Ireland Revenue office, said the illicit cigarette market was “theft from the taxpayer”.

“The trade in illicit tobacco is unregulated and makes cheaper tobacco more readily available to the young and vulnerable,” Mr Tracey said.

“Disrupting criminal trade is at the heart of our strategy to clampdown on the illicit tobacco market, which costs the UK around £2.5 billion a year,” he said.