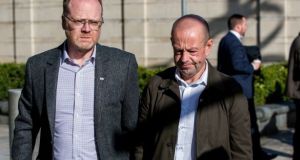 Investigative journalists Trevor Birney and Barry McCaffrey: were arrested in August in connection with alleged theft of a document. Photograph: Liam McBurney/PA

Northern Ireland’s Police Ombudsman (OPONI) has again insisted his office did not make a complaint of theft to the PSNI in relation to a confidential document that triggered the arrest of two journalists in August.

The two journalists, Barry McCaffrey and Trevor Birney, were part of a team that produced the documentary film, No Stone Unturned, released in October 2017, about the still-unsolved 1994 Loughinisland massacre, when six men were shot dead in a pub by the Ulster Volunteer Force.

The journalists were arrested and their homes and offices searched on August 31st.

A statement from ombudsman Dr Michael Maguire’s office on Friday morning said: “We stand very much behind the statement we issued to The Irish Times [on Thursday] – we did not report a theft.”

The ombudsman and Durham Constabulary’s chief constable Mike Barton are now sharply at odds after the latter insisted on Thursday that a formal complaint had been made that documents had been stolen from the ombudsman’s offices.

On Thursday, Chief Constable Barton said the Ombudsman’s office had formally reported the theft to the PSNI on October 4th, 2017, “immediately after identifying the fact that some of its ‘secret’ documents had featured in the film.”

Chief Constable Barton said this had been followed up by a written statement of complaint from a senior OPONI officer.

On foot of this, according to Durham Constabulary, it was called in to investigate by the PSNI.

“This criminal investigation has a definite and clear starting point. The report by [the ombudsman] was subsequently followed up by a written statement of complaint by a member of their senior management team,” Chief Constable Barton said

“The statement acknowledges that, following this initial report, Durham Constabulary would be conducting a criminal investigation into theft or other unauthorised disclosures,” Chief Constable Barton went on.

The escalating controversy, first reported in The Irish Times on Wednesday, arises over documents used by the film makers which contain information which appears to emanate from the ombudsman’s office.

The material was also in the possession of the PSNI.

Following a report that Dr Maguire’s office did not report a theft to the PSNI, lawyers acting for the journalists said they would seek to have their arrests declared illegal.

Emma Rogan, whose father Adrian was one of the 6 men murdered by the UVF at Loughinisland in 1994, said the families had been left “speechless” by the statement from Durham Constabulary.