Luke Wilson: The would-be assassin trying to live up to the family name 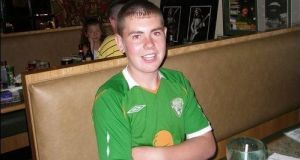 As 18-year-old Luke Wilson lay bleeding from three bullet wounds in an Inchicore park five years ago, he was certain he was dying.

It was a well-founded belief. He had been shot in the face, neck and arm and was losing blood rapidly. The only reason he was still breathing was because the handgun, which was wielded by his best friend, Patrick McCann, had jammed after three shots.

Wilson, somehow still conscious, managed to pick up the phone his would-be assassin had dropped and call 999. He then crawled to a footbridge, where he was found by a jogger.

He had been in the park to hand over a firearm to McCann that was to be used in another crime. But McCann’s intention that day was to kill Wilson – revenge for a recent row between the two men during which McCann had insulted Wilson’s uncles.

McCann would later get 20 years for the attempted murder. Wilson would lose one eye entirely, suffer sight damage to the other and be left with a permanent shake in his right arm.

Hardly the perfect candidate for a hitman then. But when the Kinahan crime faction put word out last year that they wanted Hutch associate Gary Hanley murdered, Wilson stepped forward eagerly.

For one thing, he needed the money. A severe cocaine habit – in one surveillance recording he could be heard snorting a line while planning Hanley’s murder – along with gambling debts, were beginning to catch up with him and he owed money to some dangerous people.

He was also eager to make a name for himself as a criminal player. The Hutch-Kinahan feud was sending young Dublin men to the morgue or to prison but it was also creating opportunities. Novice criminals such as Wilson could move rapidly up the food chain as rivals disappeared and new territories were taken over.

Despite being the victim of the attempted murder four years earlier, by 2017 Wilson was still very much a small-time criminal, albeit one linked to the nearly all-powerful Kinahan faction.

He was eager to live up to the Wilson name. Luke’s uncle, Eric “Lucky” Wilson, is believed by gardaí to be one of the most prolific hitmen to emerge from the Irish underworld. He is currently serving a life sentence in Spain for the 2010 murder of a British expat there and is suspected in at least nine other murders.

Another uncle, Keith Wilson, is serving life in Ireland for the murder of Finglas gangland killer Daniel Gaynor in 2010.

Carrying out the Hanley job for the Kinahans would ensure that Luke Wilson would be mentioned in the same breath as his notorious relatives.

For the detectives from the National Drugs and Organised Crime Bureau, Wilson is one of the biggest scalps to date in their largely successful battle to stem the tide of murders that engulfed the capital in 2016 and 2017.

His arrest was a result of the Garda strategy of aggressively using surveillance technology to detect planned hits before moving in right before the attack takes place.

It’s a risky approach – Wilson was caught with a loaded handgun and silencer along with three cans of petrol – but it ensures the subject has little chance of wriggling off the hook in court by claiming they never would have gone through with the murder.

Yesterday Mr Justice Tony Hunt in the Special Criminal Court praised the Garda operation before telling Wilson he would have given him 16 years instead of 12 if he had fought the case.

Wilson thanked the judge and flashed a smile at the detectives before being led away to begin his sentence – finally living up to the family name.