Uefa accepts that league seasons may be impossible to finish 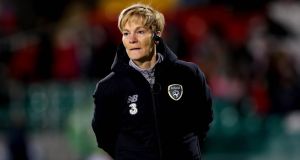 Republic of Ireland women’s manager Vera Pauw welcomed clarity on the women’s Euro Championships, which have been postponed to 2022. Photograph: Ryan Byrne/Inpho

Uefa has acknowledged that it may be impossible to conclude league seasons in some countries across Europe given the ongoing Covid-19 crisis, and said that decisions on how places will be filled in such circumstances can be taken locally – as long as the methods adopted allow clubs “to qualify on sporting merit”.

The move means that in countries where a league cannot be concluded for “legitimate” reasons, there is the possibility of Champions and Europa League places being decided on the basis of playoffs or mini-tournaments. It is also possible that leagues or associations could opt to take tables as they stand as final, or refashion them on the basis of points secured per game played. Essentially, they will have to be able to persuade Uefa that there could be no suggestion that any club qualified on a basis that was not “objective, transparent and non-discriminatory”.

At a meeting held by teleconference on Thursday, the organisation’s executive committee insisted that those leagues that can be finished should be. It also reiterated its warning that it may reject clubs put forward for participation in next season’s main club competitions if it is not satisfied with the reasons provided for failing to play all scheduled games in a country’s top flight.

It has accepted, however, that the conclusion of some leagues may be legitimately prevented either by government orders that prevent the staging of sports events or by financial considerations.

It said that it had taken representations made by the leagues in Belgium and Scotland into consideration before softening its previous stance.

Uefa’s interest in the matter does not really extend beyond what it regards as the need to preserve the sporting integrity of next season’s European club competitions, and its positions have no impact on relegation or other issues.

As national football authorities across Europe continue to examine ways to get their teams back playing safely, and plans for a resumption of the Bundesliga as early as May 9th were leaked to the media on Thursday, the executive committee deferred a decision on how Uefa itself might conclude its own club competitions. A working group is said to be examining whether it would be better to run games in parallel to national leagues or to wait until they are hopefully concluded, then pack the outstanding rounds into August.

A decision on whether to put the 2021 European Under-21 Championships back by a year was also deferred until May 27th when the committee meets again. It has been confirmed, however, that Euro2020 will retain that title when it is played a year late and that the women’s European Championships have been put back 12 months in order to avoid a clash with the rescheduled men’s tournament.

“It is great to have clarity,” said Pauw, whose team lead their group by a point from eight-times tournament champions Germany, who Ireland have yet to play.

“As we look at the schedule ahead of us, there are still three group games to play, and we remain in a good position to qualify for the European Championships. There is a lot of hard work ahead of us and it is fantastic that each of our players, who we remain in regular contact with, are working hard on individual fitness programmes.

“We understand and accept Uefa’s decision to move the European Championships to July 2022. So now our focus will be on planning ahead for our remaining qualifying games, arranging some friendly games, and then looking at the Fifa World Cup qualifiers once that schedule is set.”

Two SSE Airtricity League outfits, meanwhile, will be among the more than 650 clubs across Europe to receive payments from Uefa over the coming weeks after it decided to pay the compensation now that is due to sides whose players participated in the group stages of Euro2020 qualifying last year.

The €67.7 million involved is part of the €200 million Uefa has agreed to pay clubs for their contribution towards the European Championships, and the decision to hand the money over now was made in order to help some of the many sides who might be struggling with cash flow.

The 676 clubs involved will receive sums ranging between €3,200 and €630,000. A detailed breakdown is only to be provided when all of the cash has been dispensed after the tournament is played next year, but the windfalls for Shamrock Rovers and Bohemians, with regard to the involvement of Jack Byrne and James Talbot respectively, will be minor. Players must make the bench in order for their clubs to become eligible for the payment and so, if the €3,200 figure is taken as the fee paid per match (although this is not clarified) then the Dublin clubs would receive €12,800 and €6,400 respectively.

Niall Quinn and Stephen Kenny, meanwhile, are to take questions from members of Down Syndrome Ireland in a special webcast on the FAI Facebook page at 1.30pm on Friday. The event is intended to promote the association’s fundraising efforts. It can be accessed at Facebook.com/fairelandhttp://www.Facebook.com/faireland.

1 Born to ride, born to win: Sam Bennett, the making of a green machine
2 Next stop the Champs-Elysées in green for Sam Bennett
3 Keith Duggan: Surreal story of John Delaney needs to act as a wake-up call for FAI
4 Ulster’s European dream clinically crushed by Toulouse
5 Wolves to sign Nélson Semedo to replace Matt Doherty
Real news has value SUBSCRIBE
Crossword Get access to over 6,000 interactive crosswords